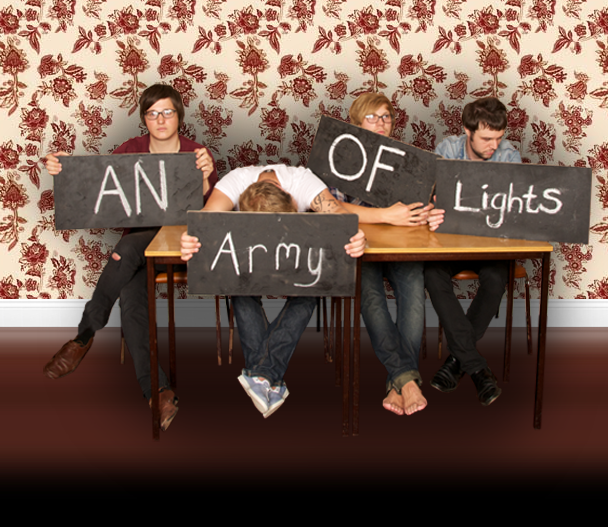 Every now and again, Ether Site manages to get a support act to answer some questions about their band. Today we talk to Dan from An Army of Lights. His band support Turin Brakes this Thursday in Bedford (tickets).

Who are An Army of Lights?

An Army of Lights are: Chris Serbyn – Lead Vocals/Guitar Daniel Smith – Guitar/Backing Vocals Chris Major – Bass/Vocals Lewis Carrington – Drums/Backing Vocals Chris Serbyn and Lewis Carrington already played together in a band called “Millers Hag” which in 2010 split up. However, the two decided they still wanted to continue and start a new band. Chris worked with Dan Smith in a local record store and asked Dan to join them on Guitar. Finally, Chris Major used to be friends with the guys in Millers Hag and was asked by Chris Serbyn to join An Army of Lights as Bass player.

Our music has been described as “grand, alternative indie with soaring vocals and delay soaked guitar lines”.

What songs should fans definitely check out before the gig? And what song do you most look forward to playing at the Bedford gig?

Songs to checkout before the gig: Latest single SIRENS, Hide & Seek and Dungeons & Dragons. We are very much looking forward to playing SIRENS at the gig! http://www.youtube.com/watch?v=JQTbTrlmbuY

Our proudest moment so far in our career is our EP being featured in NME.

We have been fans of Turin Brakes since first hearing The Optimist LP several years back! Interestingly, Chris’s lead vocal is sometimes compared to that of Turin Brakes. Favourite song has to be Painkiller! An Army of Lights are one of two support acts this Thursday in Bedford. Tickets for the gig are still available. It’s less than an hour travelling from London and you can easily go by public transport.

0 comments on “Support Profile: An Army of Lights”