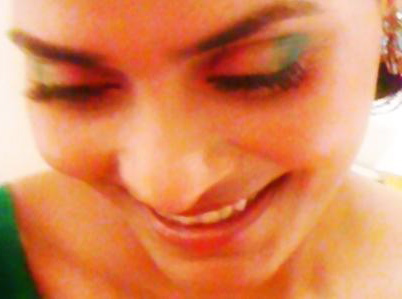 Every now and again, Ether Site manages to get a support act to answer some questions about their act. Today we talk to Shazia Rahman, who is supporting Turin Brakes this Thursday in Bedford (tickets).

Who is Shazia Rahman?

Shazia Rahman, hailing from Surrey, England but living in South London for many years now – like all the best artists 😉

How did your music career take off?

I’m at the very start here and I guess you could say the career found me; after years of the 9 to 5, I decided I could no longer suppress the musical call. Certain events also happened in my life which made me realise you have to embrace the things you want to do rather than always focusing on what you think you should be doing – life’s too short. What I’m doing now is a bit like returning to my childhood self, metaphorically living in the music room at school, but bringing to bear all the experiences I have had since then. I feel very lucky to be doing this right now.

I guess “folky” would be the easy description but having grown up listening to traditional Irish and Scottish folk it turns out that what I sing is not quite as “straight folk” as that, apart from maybe the interpretations I like to sing of some traditional songs. That has surprised me: years of thinking I am a certain way musically and finding out I don’t actually fully sound or write like that! Some people have commented that it’s more an “American” folk sound, like Joni Mitchell (Canadian, of course) or Joan Baez, which of course is a huge compliment but others have said there is definitely a “Celtic twinge” to my voice.

What songs should fans listen to before the gig?

As I’m just at the start, I had hoped to get a first finished recording – of my song, Valediction – uploaded for people to listen to before the gig on Thursday but the past couple of weeks I’ve been hounded by a cough and bad throat which has scuppered those plans. Thankfully, I’m nearly fully recovered now, which is a great relief, but it means there aren’t music links I can provide you with – sorry about that! So “Valediction” is the song I’m most looking forward to performing. It’s inspired by my father who passed away earlier this year. I’m coming to realise early on, just like writers say about the characters they create, that once you’ve written a song, in a sense it’s no longer yours. It’s an entity in its own right and you have a responsibility to honour it: you become the vehicle to relay it and you hope you can do that faithfully so that people can connect to the song. It feels like an undertaking but also a privilege, especially when the inspiration is so close to your heart.

What is the proudest moment in your musical life so far?

In professional terms, being given the opportunity to support Turin Brakes! I have followed them since 2000 (when “The Door” was featured on a compliation album I can’t remember the title of). My original vocal hero is Maire Brennan (of Clannad) but coupled with this Olly Knights’ voice continues to inspire me. “Xerox EP” is a wonderful showcase for it: listen on headphones to that vibrato throughout, wow. In personal terms, my proudest musical moments to date are all based on “Valediction’: from my mother’s and a friend’s misty-eyed response to it, to a friend telling me it reminds them of their late grandfather, to a friend telling me that they can tell, without even being told, that it’s a song commemorating someone who has passed in a celebratory way. When I heard that last bit, I thought somewhat jokingly, “my work here is done!”

How well do you know Turin Brakes? Any favourite songs?

Well I’ve already mentioned I’ve followed them since 2000 but as for stories I’m sure there have been many over the course of these years which I can’t recall right now… However, two examples are (i) being labelled “the crazy one” on my signed setlist from a Paris gig (that’s La Cigale, April 2003, Ether Tour, fact fans) as a result of my being my usual “quite vocal” fan self at that gig and (ii) more recently (Bishop’s Stortford gig, April 2011) Olly acknowledging my singing back to them by saying they’re used to people singing lines back to them but not usually in harmony! It is fair to say my default position is to sing a harmony line rather than the main melody if I’m recounting a song, so I particularly appreciated the acknowledgement!

I don’t think it’s possible to label a “favourite” song; I think these things are cyclical and dependent on where you are headspace-wise at any given time: the elements of a particular song will re-awaken for you or make you think of them in a new way or, simply, the melody will speak to you more ppwerfully than it has previously. I’ve most recently been revisiting “Mind Over Money” for its beautifully unexpected character: from the piano intro to the door slam at the end, to the lyrics (“light up my life, like a very last cigarette” – genius!) to the fact that it comes truly alive when you hear it live as compared to the recorded version on the album, particularly when there’s some extended improvised vocal. The chorus is an explosion of refrain and drumbeats!

Shazia Rahman is one of two support acts in Bedford this Thursday. Read our write-up about An Army of Lights here. Tickets for the gig are still available. It’s less than an hour travelling from London and you can easily go by public transport.