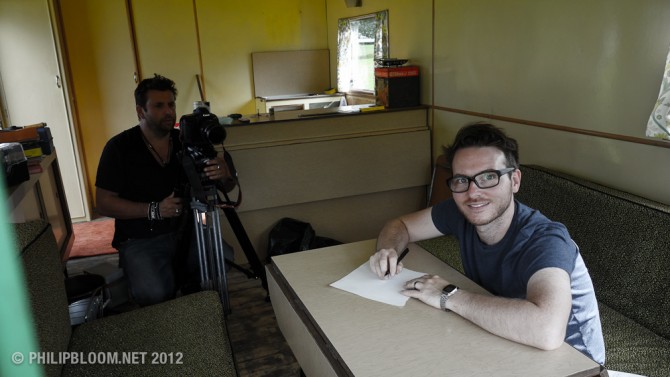 This Summer is turning out to be very exciting for Turin Brakes fans. The first half was mainly interesting for UK-based folks, with several intimate gigs providing lovely nights out. The second half is turning out to be interesting for all, with new music and a documentary on the way courtesy of Turin Brakes lead vocalist Olly Knights. I will talk about both halves in this blog thing.

Because you know, I might not hail from UK Land, but I was over there for a lovely little gig in Esquires, Bedford. It turned out to be a fantastic evening with lovely songs (including Stalker, which I hadn’t heard for years). The support from Shazia was nice too and I talked to lots of fans. I even had a go at selling some merch for a minute. With a mix of people from The Netherlands, Scotland and England we had a pretty nice time I’d say.

It gives me so much joy to talk to all the different fans. I spoke to a guy who had been following the band from back when TB were nominated for the Mercury and was attending the gig with his wife. I would never have talked to this guy, were it not for TB deciding to play in Bedford. Part of what makes TB gigs so great is the nice and friendly people that attend them. We’re a colourful bunch, if you don’t mind me saying. The nice music helps too, obviously. And one or two beers. Apparently I went a bit mental during some songs.. But let’s not go into that right now.

So… Olly’s recorded a solo album to overcome his writer’s block. That is AMAZING news. When I interviewed Olly and Gale last year before their Optimist tour dates in Scotland, I asked afterwards whether they had an album ready to strategically release to build on the Optimist momentum. Well. There wasn’t. And there still isn’t. But there’s an album from Olly and that might be even better just now.

During the interview, there was no sign of this band quitting and there is no sign of that now. Olly has been clear that TB are still going and if whispers are to be believed, the band head into studio later this year for the follow-up to Outbursts. The vibe I’m getting from Olly’s single and the documentary teaser is that it’s been like therapy for him: literally banning out all influences from the outside world, writing and singing at home and see what happens.

Well. What happened is hopefully something wonderful. It must be, judging from what we already know. It must be rewarding to think/write/play outside the box for once. Writing “for Turin Brakes” for 13 (!) years might end up being harder and harder. You can’t do death metal or trance, there’s a concept called Turin Brakes and even if the definition is a little vague, there still IS a concept in your mind. Every band has a concept underneath. That might evolve but the core essence stays the same.

So while Turin Brakes have always tried to evolve on their albums, to a certain extent they came full circle with 2010’s Outbursts. Although much more confident and experienced, the production values resembled their debut, even working with some of the crew from album 1. And when the band played The Optimist in full last Winter… Well… Full circle indeed.

So to figure out how to go on, knowing you WANT to go on, might be a difficult task. Even I – a pretty die-hard TB fan I’d say – wasn’t completely sure what I wanted next. Well, a new album yes, something that shows me TB are still as awesome as ever and that also surprises me… But what that sounded like? No clue.

Who knows, maybe Olly wasn’t sure either. And all he heard were these little voices in his head going “this is Turin Brakes” or “this is not Turin Brakes enough” or “this is not a single.” I might be completely wrong (let’s await the documentary that will surely touch on this subject according to the teaser). But just typing these questions give me a writer’s block.

(not really though, I wouldn’t be able to finish this blog yet I’m going to now!)

No matter whether I’m right or wrong about Olly’s writing problems: what better way to grow as a band than to head of, do something completely different (i.e. record a solo album or work with other artists) and see where that gets you. And then return with that experience to the studio and record a TB album? Yes, If not now when? Now seems a pretty good time to release this solo album. Now, indeed now…

The single If Not Now When reveals a labour of love and existential questions that are familiar to a lot of TB fans – at least a lot amongst the fans I’ve had the pleasure to meet… Have you listened to the song on nice headphones? You should – I absolutely love it and played it on my journey into work eight times in a row, just to absorb it fully. Then I admittedly did play something else. But that’s not relevant. What is relevant that I’m really looking forward to Olly’s solo effort. Not just because he’s from TB but because I’m pretty sure this will be an amazing record. Hopefully it’s released in September rather than October… We’ll see.

So, finally, what does this mean for the future of TB?

Apparently, Olly’s been recording ideas for it – he said so on Twitter – and hopefully Gale has been doing the same. It’ll be good to seem them heading into the studio and working together for another record. Perhaps we might even get a more “band”-like record after this intimate solo effort? I’ve been waiting for the band to capture their amazing live feel on studio recordings and last year’s Rescue Squad (from the Xerox EP) was an absolute delight in that aspect (it was also really catchy – that helped). I wouldn’t mind an album full of Rescue Squads: energetic, good-spirited and very much like Turin Brakes live. Maybe let Gale do a two-minute solo on one song and let Rob do a weird intermezzo in another song. But that’s just me. I don’t have the musical force they have had for years and years. I hope that like with Olly’s solo effort, they’ll ignore expectations and just let the musical force flow. I can’t wait to hear the results.

Actually, I CAN wait. After all. I’ll have an album full of honest, home-grown songs soon to tide me over. I’m excited.