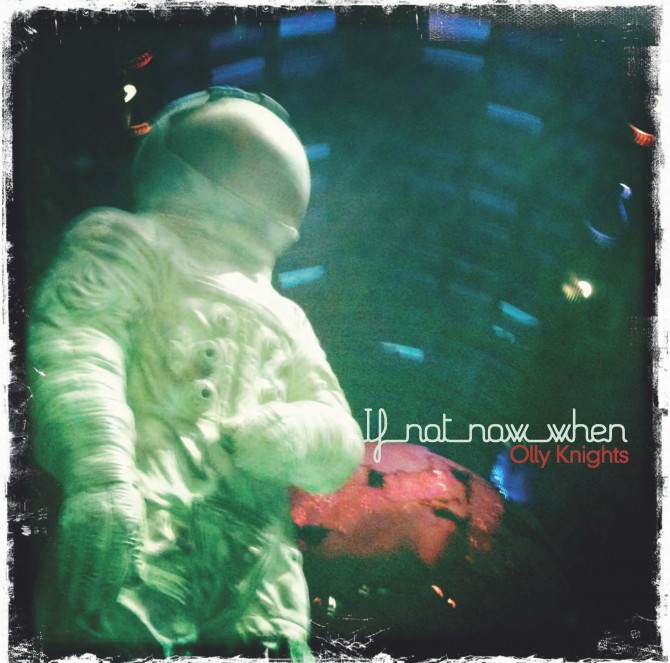 One of the many reasons to like Turin Brakes is because, in the end, it’s very nice music made by very nice guys. In fact, one could argue that they’ve always been an odd fit for the fame game: no outrageous behaviour, strange dress sense (dodgy haircuts asides ;)) or showing up extremely late on stage, being an ass and then walking off after 20 minutes… and no vanity projects of a lead singer that needs to go solo.

And while Olly Knights did feel the need to go solo – he talks extensively about the need to break away from Turin Brakes temporarily to be able to write songs again – Olly Knights’ solo record If Not Now When is anything but a vanity project. It’s a modest, home project from a house dad who also happens to be a great musician and singer. This is no vanity project with a big marketing / pr campaign behind it. A modest run of 500 vinyl and cd records initially, a digital release and another run of vinyl. it might have reached more people with a giant company behind it, but that would have destroyed most of the love behind it. This is a love-for-analogue-music project, not a love-my-ego-project (thus we see a space suit on the cover instead of Olly in a smart suit) and that’s only one of the many reasons you NEED to listen to it. Because it’s also the most honest and direct we’ve heard Olly sing and play in many moons.

Rip Chord, the album’s opener, is by far the most difficult song to get into though. While lyrically, there are similarities to the anxiety and escapism that Turin Brakes fans might be familiar with, the musical structure makes it hard to get into the song ‘till the very end. The song returns as a brief tangly-guitar-instrumental after the title track though, and then already it’s welcome return. If anything, it tells us that this is a timeless record, a record that isn’t rushed or cut to the bare essence of it. Still, hardly any of these tracks run much longer than 3 minutes.

The title track is a better indication of the way the record sounds: traditional, referring to Nick Drake rather than Damien Rice. The album features hardly any reference to modern culture and media let alone autotune or dub step. The songwriting is rather British too. Side A closes – after some excellent vocal work on the tracks before that – with a song called Searching For England. You could assume that this is one of the few traditional folky songs – one that reminds me of Laura Marling, but the fact is that Side B is full of these kind of songs.

Before you get there, though, side A has firmly established the boundaries of this soundscape. The Introvert sees Olly using his vocals to the limit, it feels, and the other tracks display the different kinds of guitar that can be heard on the record overall. At first you might think that your record player is running slightly too fast or too slow, but not long thereafter you realise that this IS how the record sounds. And then you smile. Intimate and in some ways it can be considered inperfect, but never safe or dull. Not at all. They must never know, just how dark the night time gets gives me goosebumps.

Side B is probably the most accessible side – and currently my favourite. Opener I Hope I Know You Well is rich, while Jaws of Doubt has a rather Turin Brakes’ feel to it, with a similar vibe as some TB b-sides have. The same can be said of Don’t Break Before You Bend: it feels a bit like Time Machine, one of the unreleased tracks on the Bottled At Source-compilation, but better. In fact, I’d say the final three tracks are probably the strongest songs on the record – together with the amazing title track. Bitten By The Frost showcases some lovely piano work and a gorgeous melody. And I’ve been humming These Days Of Sun ever since I’ve listened to it once. This last track especially refers to the traditional singer/songwriters that were the inspiration for this record.

I find myself struggling to sum up this record. Because I’ve listened to it exclusively on vinyl so far, all songs are connected to the next and previous. No shuffle allowed. That might be the reason why this record feels strangely round and whole. Or maybe it just IS strangely round and whole, even if you just shuffle the MP3s round endlessly. Listening to this album on vinyl forces you to listen to it in a certain order and to pay attention. The whole process of listening on vinyl – one I’ve only grown accustomed to in the last 4 years – makes the whole experience more mindful and thoughtful. I’ve not reached the stage yet where I put on a vinyl and just head off to another room and do something else with the music humming vaguely in the background. And because of that I’ve started to see patterns, see similarities and differences that I hope you’ll all notice… And I hope to discover on any record, really. I’ve found them here. Beneath the simple production you’ll notice familiar synths, the tapping of feet and other lovely details that you may miss when listening to the record while rushing through city life.

If Not Now When is relaxed, honest, direct and immediately a classic. When These Days of Sun finishes you’re no longer sure whether these songs are half a year old or half a century. And I guess that’s the beauty of it. It’s not a trick forced by the technology used or the writer’s choice of references or playing style. It’s sum of all parts that makes If Not Now When sound familiar, old, fresh and lovely. And anyone who has turned on a radio in recent times, knows that it gets increasingly hard to track down such music these days. I certainly hope that in time, this record finds the audience it deserves.

So where does this leave Turin Brakes? Olly made clear that it was never the point to simply leave that world behind forever. Gigs are still happening and I hope, for one, that Olly Knights is able to take the freshness that can be found here and translate that with Gale into fresh material for the band. If Not Now When proves that Olly more than holds his own when it comes to writing, recording and releasing music. The beauty of Turin Brakes is that when he doesn’t want to do that, he doesn’t have to. I can survive on a 3-year album cycle for Turin Brakes if it means that lovely little projects like these surface every now and then. In fact, I’d prefer that to just putting any creative output in some kind of Turin Brakes jacket because of the success that band is experiencing. When I switch off my record player and the turntable slows to a halt, I’m left with the feeling that my world is just a tiny bit better. And it wasn’t that bad in the first place. If Not Now When is music for the mind, not for the dance floor. But my feet are tapping along and my heart is singing out. Listen to the record and you’ll know what I mean.

‘If Not Now When’ is released on 22 October 2012 and available from here and iTunes. Check back on Monday morning (22 October) for an exclusive interview with Olly. Please leave a comment with your opinion on the record!

0 comments on “If Not Now When – The Ether Site Review”