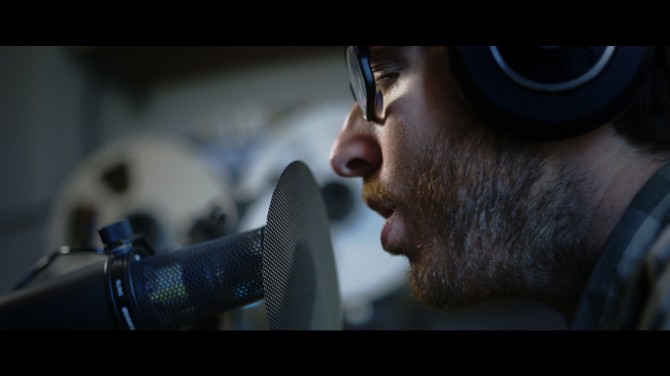 Today sees the release of If Not Now When, the debut solo album of Olly Knights. Ether Site is obviously very excited about this. To celebrate, Olly agreed to answer some questions about the project and the current status of Turin Brakes.

ES: What does it feel like to release this solo ‘home’ project to the world?

‘I love records that are clearly coming from someones highly personal world, with all the character and oddness of those places and that have the artists fingerprints all over them, but what’s really interesting is when that highly personal work is re-presented to an audience that can actually relate to it, that seems to be an art form in itself. I’m getting tired of “perfect” recordings, as in technically smooth and ironed out, my ears seem to be more interested in quirky oddities. This is all HIGHLY subjective but I figured I could make a record like that and *some* people out there in the world might really dig it. So far it’s been great but I think you can only really judge how successful a record has been a few years down the line, some take a long time to bed is. This record is pretty chilled and subtle, it’s not loud and in your face so I assume it could get over looked at first. But time changes that as long as people have access to it…’

‘I did, it was actually very scary. Every now and then my confidence in what I was doing would crash but something made me get through the ups and downs, I kind of knew it needed to be done, in the end it seemed to work out.’

ES: What has surprised you most about this project (from writing the songs to releasing them this weekend)?

‘I guess that big oak trees really do grow from small acorns, or at least medium sized oak trees ;)’

‘I know it seems odd and could be a frustration to some, but I always intended the record to be a bit more than just the music somehow, I modelled the album on some experiences I’d had with my own favourite records on vinyl and wanted to encourage people in a friendly way to do the same. So I decided to try and package the record in a way where people who may have forgotten what it’s like to sit down to a record (or maybe never did!) might actually get to do it. There’s nothing like it. Playing the vinyl seems to make the music come alive in the room with you. Again, I know this is all very indulgent and airy-fairy stuff I’m saying, but why not have a concept? I’m not putting a gun to people’s heads and saying “it’s vinyl or NOTHING!!!” It’s available on plain MP3 too, I just wanted to gently encourage a way to experience the record but it’s not essential.’

ES: Are you happy with the response so far (pre-orders, fan response to the (announcement of the) project)?

‘I can honestly say that every order of the record has been like a little high for me and feels great, the response has been way better than i dreamed of so far and I feel SO lucky to be in a position where I can do this.’

ES: The record has a rather timeless feel to it – and not just because of the old machines used to record it. What would you say were you’re main influences for this record in terms of sound and style?

‘I LOVE records from Nick Drake, Joni Mitchell, Elliot Smith, John Martyn, some classic/timeless? heartfelt music about the human condition. I just wanted to try and make my own teeny tiny mark of my own. It’s so hard to pin down what this area is, it’s a feeling, a sound, an atmosphere? I knew I had some of that atmosphere in me and it needed to get out, I had some things to say and some colours to paint.’

ES: Thematically, would you say this record is strongly linked to themes that have been present in Turin Brakes songs in the past?

‘I’m sure thematically it crosses over with some TB, I mean I’m the main writer for TB so it should, it was never a conscious decision, I just wrote what I felt, I trust that. I was very pleased that it sounded different to TB. And it should: Gale has a very strong influence on the sound of TB, the last thing I wanted was it to sound like it was a kind of diet TB! This record was a chance for me to explore some other realms, it was healthy I think.’

ES: Were there many recording takes required to get the sound you wanted?

‘No, once I was on the right road it happened super fast, I was in a furiously creative place when I did it and was working all the time. I did spend a very long time researching it though… How it should sound and feel, I had to learn some new techniques!’

ES: Is there any song on the record you’re particularly happy/pleased with?

‘Girls and Ripchord are my personal high points, I’m also pleased I put an instrumental on, something I used to do all the time with my really early recordings as a teenager, it seems to be a landscape for the other songs.’

ES: What do you hope people will take with them after listening to the record?

‘A sense of warmth and a longing to come back to it. If it became a friend to people that would be mission complete.’

ES: Would you say any of the songs on this record could have ended up on a new TB album instead? If not: can you talk about the differences in the creation of these songs?

‘It’s subtle but they all belong in a different place. I purposefully used a very different tuning and playing style to TB, and I figured if it was me playing all the instruments (with my wife on piano) it would go somewhere else, which it did I think.’

ES: Have Gale and / or the guys from the TB live band been involved in the creative process at any point?

‘No they haven’t been involved, again if they were it would begin to make the point of a solo album moot to my mind, I have huge respect and love for what TB is and does, I wouldn’t want to do another version of it without the people involved.’

ES: Do you consider this as a one-off thing, or will we be able to hear more Olly Knights music in the future?

‘The idea of going further down this rabbit hole makes me excited. At the moment I like the idea of exploring the subtle ambience of the wobbly synth layers I touched on, perhaps leaving the guitar world behind a bit more and embracing a more experimental landscape for the songs and structures.’

ES: Are you hoping to play any solo shows, since you’ve mentioned that you’re not that comfortable in the spotlight? Will you play any “solo” songs at TB gigs, since there are no solo gigs planned thus far?

‘If I do any solo shows they will be separate from TB. As TB we have so many colours to choose from, I’m not ready to make up my mind about the live thing, it’s a major thing to undertake, it’s possible ;).’

ES: Has this project influenced your view of the Turin Brakes project anyway? Has it cured your “writer’s block” when it comes to writing for TB?

‘It’s put TB into a new perspective, I see it as a choice now rather than all there is, I think and hope that’s a good thing…. As for the block we shall see, so far so good.’

ES: A final question, I have to ask: how far along is the new TB record?

‘It’s a bunch of promising scraps on my laptop at the moment, we need to get our shit together to be honest but I’m sure we will! Everyone is excited to capture the magic we seem to create in the live shows somehow… Catching lightening in a bottle.’

If Not Now When is out now. Check out the Ether Site review here.

1 comment on “If Not Now When – Ether Site Interview”