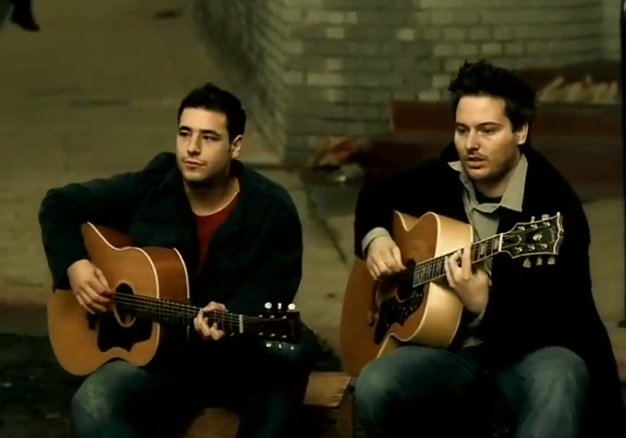 Happy Sunday everyone. And it’s a special one, as today ten years ago, Painkiller (Summer Rain) was released as a single, and arguably the height of Turin Brakes’ commercial success was reached. It was an exciting time for fans. Turin Brakes were on the radio, on the TV (even in The Netherlands the video could frequently be seen on MTV, where the single was released a month later and only made it to 64, a decent effort considering the band was never sent on huge promo tours visiting tv shows and only did a handful of radio and written press appearances) and in magazines. It’s a special song, if only because it has had the lasting power that only the best kind of pop songs have.

Because that’s what it is. A pop song. Not in a bad way. It features guitars, snappy lyrics that could be interpreted both as a love story (for the naive) and oral sex (it’s about oral sex). It has a catchy hook and even before the success of the single, the band described it as pop themselves. Not too pop, but pop.

Olly: Painkiller is the most extreme song on the album, not in terms of progression, it’s just a blatant pop song and we had never done that before. We weren’t sure whether to do it or not.

Gale: We just didn’t make it too pop, it’s still got an edge to it, it’s pretty cool still.

Olly: It’s interesting because for us its the less cool track, but it has the ability to get into places that other tracks on the album won’t be able to, and like Gale was saying it has an edginess to it which you discover after a while. The lyrics aren’t that clean, it’s a bit dirty. the whole thing’s a bit twisted but it sounds happy. And having a song or two like that on a record is no bad thing. Its exciting for us because its hopefully going to open a few doors for us that have remained shut before.

And open doors it did. Sell-out headline tours, US support slots and ofcourse the top 5 of the charts were commonplace for our favourite band. And the song, well it stuck with the band. I think it’s safe to say that the band have played it at every single gig since its release, sometimes in a ridiculous fast way to get it over with… While at gig I’ve never had the impression the band were skipping through Underdog or Mind over Money, but I did feel sometimes like Painkiller was slightly rushed. And perhaps, as a fan that has been to many Turin Brakes gigs over the last ten years, I too sometimes felt they should get it over with as quickly as possible and skip to more interesting stuff like SO LONG! PLAY SO LONG!

They never dropped Painkiller from the playlist as far as I know. And I guess that’s true, because Turin Brakes draws completely different crowds. There might be die-hard fans in the audience, but there’s always fans in there for whom Painkiller is one of the few points of reference. They see the band are playing Preston or Gloucester, think “AH, yes, they’re the Painkiller guys!” and decide to spend 20 quid to see the band on a Saturday night. And usually they end up having a good night. Not only because the band played another great gig, but also because they played that song. Painkiller.


And that’s one of the great things about TB. They’re crowd-pleasers. Yes, they could have dropped Painkiller and instead play Ambient 2 (you know, the hidden instrumental track from JackInABox?), but they don’t. They want their audience to have a great time. And as long as Painkiller gets greeted with cheers from the crowd, they have good reason to.

Now, to date, Painkiller remains the only top 5 single the band have released. The record label did try to repeat the success by rushing 5 Mile to the shops (see here), but that was rushed and without the love the song deserved. And after that, I don’t think the band ever tried to write another Painkiller. They did write songs with catchy/great acoustic guitar hooks, it has become their trademark, but never again tried to get that close to genuine guitar pop. Well maybe Rescue Squad comes close, but that song was hidden on an covers EP and never released as a single. I doubt the new album will feature any song like it, considering the dark tones Olly has described in the press thusfar.


Painkiller is in many ways unique in the oeuvre of Turin Brakes and while I would wish the guys increased commercial success with their next album, I would like them to achieve it by doing what they do best. Not just by writing another Painkiller. Because every gig again, it’s confirmed to me that the band have such a great roster of songs. Painkiller might stand out commercially, but qualitywise, it’s as good as the rest of ’em.

And the thing about great pop songs? You never go truly bored of ’em. Yes, you might underappreciate them for years, take them for granted. But then it creeps back up. It might come by on shuffle, or on the radio. And then you play it 5 times in a row, reliving the memories attached to it. And last time I saw the band perform – in Bedford – I danced and sung along like my life depended on it. And it made me feel good.

I was a bit disappointed they didn’t play So Long though. 😉