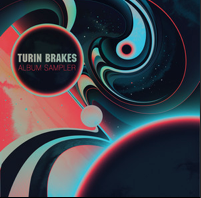 As previously reported on Ether Site, Turin Brakes have just released a 4-track-preview EP of songs from the new album on Spotify. The four songs are also the first four songs released in preview videos, except these are full-length versions and higher quality. Time and Money, Guess You Heard, Stop The World and We Were Here are all available in both the UK and abroad.

Listen to it here. Spotify is a free streaming service supported by advertisements, although premium (paid) subscriptions without ads are available. It looks like this is a Spotify-only sampler.