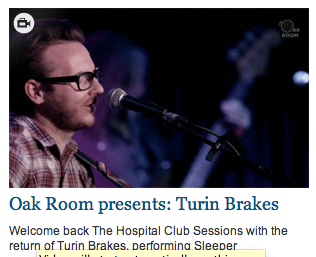 The Guardian has premiered Sleeper, one of the songs of the new album, performed live at The Hospital Club. The Guardian will post more videos from the gig.

It’s time to welcome back The Hospital Club Sessions – a series of exclusive live performances filmed in the Oak Room of The Hospital Club in central London. We kick off with the return of Turin Brakes, performing the song Sleeper, a standout from their new album We Were Here, released on 30 September. Later in the series we’ll have more music from Turin Brakes – and a host of other acts, including Morcheeba.

Anyway, nice to see our favourite band on the frontpage of a national news outlet! 🙂 Sleeper was the first song of the new album to be played live, as early as last year.

2 comments on “Watch: Sleeper live at The Hospital Club”