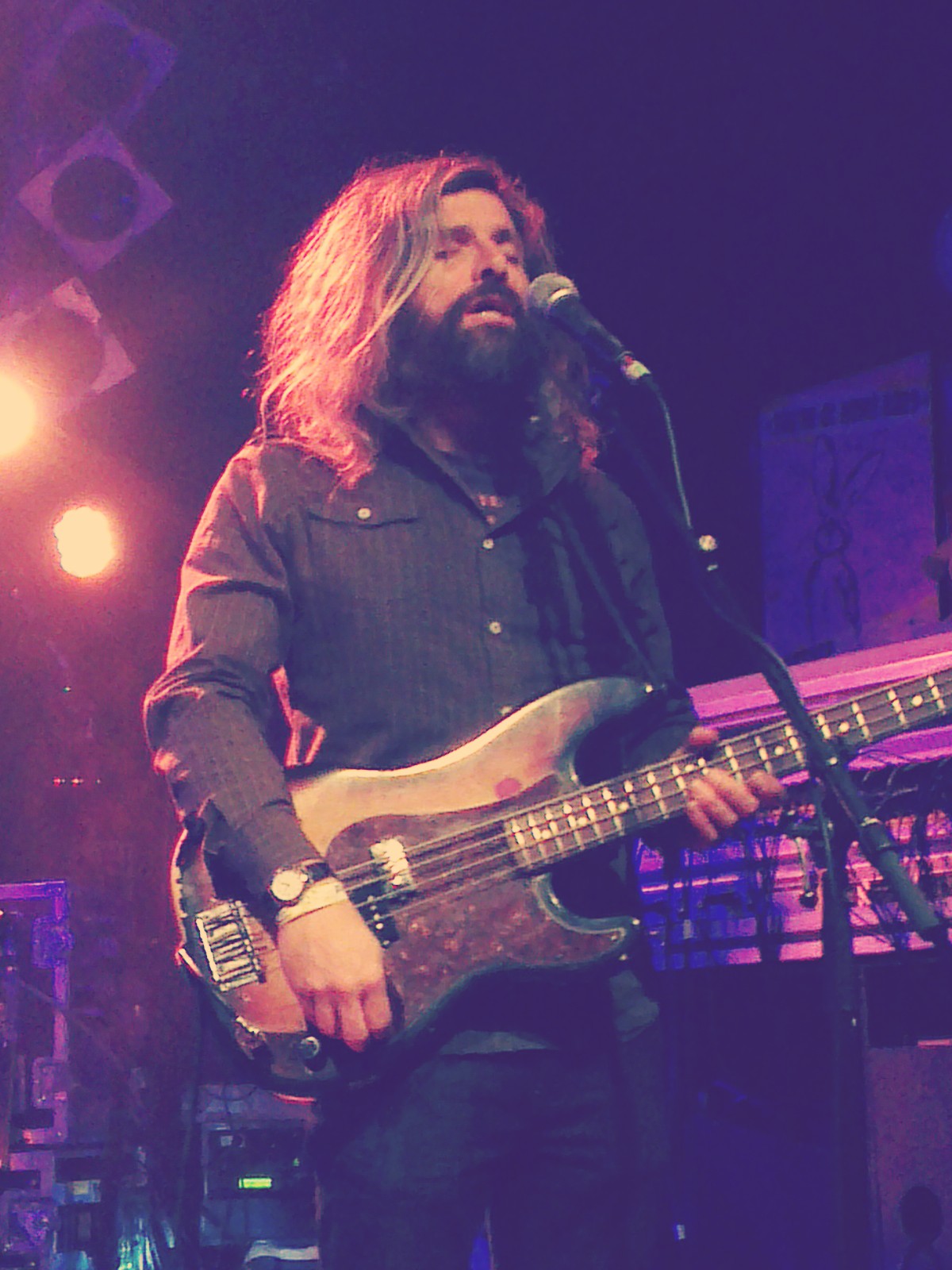 Eddie Myer is a man of bass perfection, impressive facial hair, but if we’re honest also a man of mystery. He plays various musical styles with various music acts, but we all know him as the bass guy on stage during Turin Brakes gigs. He’s been there since the beginning, so we thought it was long overdue to ask him some questions, especially since he released his solo record Why Worry? last year. This jazz album was for sale at the We Were Here tour, so we got ourselves a copy and then asked Eddie some questions about it via e-mail. The responses are beautiful, honest and often very funny. So meet Eddie: “I’ve always had  a love of jazz.”

Most of us know you as the bass player of Turin Brakes. How did you end up in the band?
“I met the band as their first manager and sometime bassist Phil Passera and I shared an interest in exotic horticulture. When he wanted to forgo bass-playing in favour of issuing directives, and expand the line-up to include double bass, he was kind enough to recommend me. I went and met Olly, Gale and Phil Marten at a studio in London and passed the personality test by not pissing anyone off, though sadly this state of affairs was not to last.”

TB have been going for over 14 years, during which you’ve played with them as a 5-piece, 4-piece and even as a trio occasionally. What has made you stick around all this time?
“I’ve stuck around because I feel a deep connection with their music, which even I cannot fully explain, and also because our destinies are now irretrievably entwined. Constant touring also keeps me supplied with hotel stationary, without which I struggle to arrange my life.”

What’s your favourite Turin Brakes song – and why?
“My favourite songs change, depending on my current emotional, physical and existential well-being. Right now, playing “Goodbye” makes me feel alive, to an almost unbearable extent.”

Your facial hair is very impressive and compared to the 72 video, you look like a completely different person (your playing style gives it away though)… Did the rest of the band force you to grow it this way and do you have any grooming tips how to make it look this impressive?
“My facial hair appeared when I was marooned in a spiritual wilderness, like Tom Hanks in “Castaway”, though destiny did not furnish me with a punctured basketball. The rest of the band had no influence on its generation, but they now insist that it remains untrimmed as they no longer remember what I look like without it. I have no grooming tips I can share; the only true beard is the one that you grow from the inside, out.”

You’ve played and toured with other acts, for example Lucky Jim and your 5tet, in various music styles… Can you tell us a little bit about your ‘life in music’ and what you’ve worked on in the past?
“My life in music started late and has been a hazy nomadic ramble, characterised by sudden impulsive changes in direction, long periods of bewilderment, an insatiable curiosity married to a deep sense of underachievement, laughter, tears and large quantities of intoxicants, like the peregrination of a lost and emotional wedding guest making his way through a ravishing but unfamiliar landscape in a choking fog. As a result, I have so lost touch with the rest of my potential that I no longer have any options but to pursue whatever musical path opens before me, though I have sometimes harboured dreams of an escape into the more tranquil surroundings of arboriculture or beekeeping. In the past I have worked with men and women of many nations and have seen many musical voyages dashed upon the bitter rocks of failure and despondency, yet somehow destiny has kept my fragile craft afloat and I feel increasingly blessed by some of the talented fellow-travellers I have had the good fortune to associate with over the years. Recent shipmates include Cape Verdean superstar Mayra Andrade and supernatural wormhole enthusiast Kevin Pearce.”

You’ve recently released a jazz album with your Eddy Myer 5tet, called Why Worry? How did this project come about and what was the idea behind it?
“I’ve always had a love of jazz, ever since I accidentally bought a Thelonious Monk record which had been misfiled in the reggae section of the Notting Hill Record and Tape Exchange. This led to my believing that I could actually write and record a jazz album myself, so I went round telling everybody about my intentions until I discovered that it was too late to back out.”

Can you tell us a little bit about the other guys in the quintet and how you guys met?
“On this record, I’ve been incredibly fortunate to have secured the talents of four really outstanding musicians and composers. I work with Luke Rattenbury (guitar) on a weekly or sometimes daily basis, playing jazz and afro-cuban music, both styles at which he excels- I’ve known Tristan Banks (drums) for years and have been amazed at the constant evolution of his talent – Likewise Ian Price (sax, flute), one of the most single-mindedly dedicated musicians I’ve ever met – I was very fortunate that Frank Harrison (fender rhodes) took the time off from his busy international schedule to lend his unique abilities to the session – and I have to mention Mike Pelanconi, ably assisted by the Mutant Hi-Fi, for his outstanding skills in recording and mixing the project in his own Ironworks studio in Brighton.”

What’s it like recording a jazz album, compared to recording with Turin Brakes or other projects?
“Not to overwork a metaphor, recording a jazz album is like setting sail into unexplored waters. You have charts and compasses and the stars to guide you, and you rely utterly on your fellow sailors for your survival.”

Why Worry? seems like a very positive title. Jazz can both be energetic and joyful as well as very moody and melancholic. I’d say, apart from maybe ‘Moon Tune’ the compositions all have a very joyful aspect to them. Do you agree with this and was this what you were aiming for?
“I’m glad you think the music sounds joyful. I’m trying to be more positive generally and this album is a part of that process.”

Does the quintet perform live?
“We’ve performed the whole album live twice, both times at the wonderful Verdict club in Brighton.”

The jazz scene has a long history of standards , Why Worry? however only contains compositions by the 5tet members; Who would you cite as your influences in jazz and are there any artists whose work you particularly enjoy playing?
“I wrote three tracks, Ian wrote three and Tristan wrote one. Contrary to what some people believe, melody is essential to jazz playing and I’m influence by all the composers and players who keep melody as their primary muse. Whenever I can, I return to the standards of the American Songbook, learning more about concise melodic construction each time.”

What would you recommend to listen to after Why Worry?
“I’d like to think that after listening to Why Worry you might sit awhile immersed in silence, or alternately ride somewhere nice on your bicycle or prepare a nourishing meal.”

Where can fans who couldn’t buy it during the UK tour obtain the record?
“The record is not available in any on-line format, but if you contact me via Facebook I’ll get a copy to you.”

Are there any other distinct musical styles you enjoy playing?
“Right now I’m playing a lot of Colombian cumbia and Afro-Cuban music with people from those parts of the world. It’s an inspiration and an education.”

What are your music / cultural plans for 2014? Anything you’d like to share?
“Well, there’s plenty more adventures to be had with Turin Brakes. The grooves I’m creating with the mighty Rob Allum on drums are reaching a pitch of perfection. In between whiles, I’m hoping to create some more jazz, both live and in the studio, and I’ll probably end up watching a lot of children’s TV.

Thank you for your time Eddie! See you at a gig!

2 comments on “Eddie Myer: “My life in music started late and has been a hazy nomadic ramble””