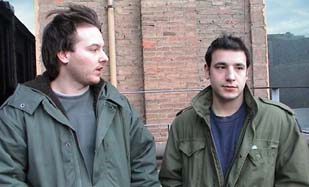 For me, being a Turin Brakes fan involves doing a lot of things. For example:

And that’s just some of the things I do for the website. As you all know to some degree, being a Turin Brakes fan means listening to the beautiful music, seeing the band perform live (most of the time that means travelling to the UK), hoping to get your cd signed and singing along in your car to Guess You Heard, Painkiller and In-between. Or on your bicycle, if you like cycling list most Dutch people do. And it means plugging the band with friends and colleagues, dragging them along to the gigs and make them see how awesome this band is. I can’t hide the smile on my face I get when I (not so) secretly play Turin Brakes in the office and have some colleagues humming along to the songs.

So this may sound stupid, but during an album release such as We Were Here I listen to the album, and listen a lot. I write a review type article about it. And I like that album. To this day, whenever I play We Were Here, I hear new things. I don’t control when I start to love it, or when I truly know it, or when it hits me or when certain details start to stand out.

Because it’s not up to me when a good album hits home. That’s up to… I don’t know, life, or music or the “stuff in between” that this band loves to sing about.

For example, I have listened to Blindsided Again for months now. Again and again, on vinyl, on Spotify, on cd… I’ve heard the song live twice, even. Yet the epic line At night I grow wings, I soar above my own life from the climax, it never really hit home…. Until today. And it made me want to finish adding the lyrics to the site, so I once again put on We Were Here and listened, reading the booklets and making sure to add the extra “ooohs” and details that they don’t put in there. And even the lyrics I’ve been singing along get a new meaning when truly studying them. Here are some that spoke to me in detailed isolation:

All the junk in space, old TV shows and radio waves / they become your friends / beam you home

Long grass, catch my thoughts and keep me dreaming

Where will I go / the time that the lights low?

Bonus points if you can name all the songs. 😉

Anyway, now I’ve once again studied this album in detail, embraced it’s emotions and lyrics, what struck me is how much of a Turin Brakes album this truly is. That may seem obvious, it being made by Turin Brakes and all… But the lyrics seems to exist in the same universe as songs like By TV Light, Stone Thrown, Come & Go, Radio Silence and Dark on Fire. That world that doesn’t capture one state of being, but rather a whole existence.

Turin Brakes keep on building this world full of songs. I wouldn’t say it’s a world full of characters – the number of character-based songs, or storylines, is quite low. Most of TB’s songs seem to appeal to all the emotions we know and live with. So if a song says “Long grass, catch my thoughts and keep me dreaming”, then that might seem whimsical or vague on first listen. But if it hits home, you can picture it… Thoughts buzzing round your head, leaving through the air, caught by the long grass… Like the dew, or like the air blowing through the long grass. It just works so well.

While other bands might try to dazzle you with fancier words or complicated song structures, Turin Brakes, in my humble opinion, have always managed to strike the balance just right. Turin Brakes songs are songs that appeal on first listen, but always offer deeper level of detail if you keep paying attention and listening to them on the right moments. In the case of songs like Blue Hour and By TV Light it has taken me years to completely embrace those songs, but in the end I was rewarded more than I could have hoped.

So either I’m going crazy or I’ve hung in there long enough. Whatever it is, it seems I’ve found it on We Were Here too. And it’s great, amazing thing when you can put on music and have it hit home. And make it feel like home, wherever you are. Once again, We Were Here has the power to do that to me.

And if it read like I was complaining about all the stuff a fan has to do: I wasn’t, truly. I love doing those things and I choose to do them. And as long as the reward is that there’s a band across the North Sea from me that keeps on making just the right music, it’s totally worth it. I don’t think I ever chose to like Turin Brakes. They were there, and then, at one point I did. It just happened. And I can’t choose to stop liking them. At least not when they’ve still got what made them work in the first place. We Were Here proves they still got it for me.

And thus I will travel to London next month to see this awesome band play live. Hopefully: see you there!

2 comments on “[Etherish] When a good album hits home”