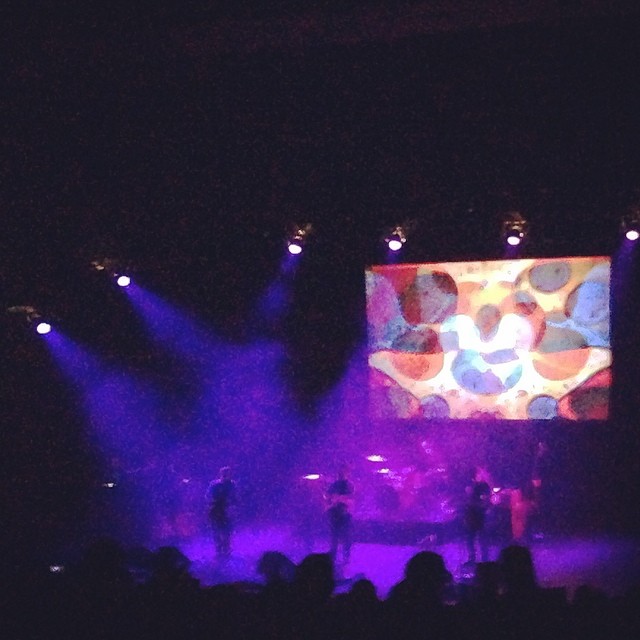 I’ve been meaning to write about the recent gig I attended, so here it finally is… Early May I flew to the UK to see Turin Brakes play Queen Elizabeth Hall. It was about 6 months after the last time I saw the guys, in London and Brighton on the We Were Here tour. On the radio (XFM), Turin Brakes promised this would be a different affair from those shows and there would be some tricks up their sleeves. I’d say we were not disappointed.

Turin Brakes were supported by a band called Pylo. They seemed to have sound perfectly suited to the venue, and if you’re into slow-building rock songs that could all serve as starters to live sets, definitely check them out.

The main show kicked of with the four same songs as the We Were Here tour: the first four songs of new album We Were Here. Time and Money had an uptempo vibe to it, while We Were Here sounded lovely as ever. Dear Dad featured Paul the Doctor on flutes, and said Doctor would return for a spirited saxophone performance for Guess You Heard. He must have felt more comfortable on that song than the last times I heard him play, because when the band went off on their instrumental journey, Paul started freestyling, almost but not quite bursting into a Kenny G-style solo… I put my money on an epic solo next time I hear this song live in London ;). Fingers crossed!

I had anticipated the sound of this set to be clean and sophisticated, but it turned out to have a dirty, industrial rock sound at times. This particularly suited songs like Blindsided Again (listenable here) and Painkiller. Almost a shame that the gig was seated. We were stuck in-between people so leaving the row to go and dance on the balcony wasn’t option this time.

But besides the more danceable moments, there was a lot of introspection as well. Olly dedicated Chim Chim Cher-ee to his mother, who was celebrating her birthday and we got the lovely Erase Everything, which I captured on video:

Gale experienced some guitar problems during the song, which I thought were caused by one of the support guys kicking the guitar during their final rock-out, but who knows really ;). At the 2 minute mark Gale finally joins in, first vocally and then on guitar.

During two songs the band used some visuals which looked pretty space-y /trippy and suited Blindsided Again. Another special treat arrived during the second encore, when Olly and Gale invited Hudson Taylor on the stage to premier their songwriting collaboration. It’s an uptempo song called Just The Thought, which recently also got an airing on BBC Radio 1. It sounds like a catchy tune in all cases and a unique opportunity to hear Turin Brakes and Hudson Taylor play it live together. let’s hope it appears on Hudson Taylor’s album…

And then there was the new song: Be Home Soon details the band’s experience at SXSW in the United States last March. It sounded like the band felt a bit out of place on the festival itself. So, Olly explained, they wrote a little song about it. And it’s certainly lovely:

The lyrics are classic Olly in my opinion: direct, straight-punching and painfully honest. In that way, it harks back to more bittersweet songs like Stone Thrown, with a clear difference: the references to his kids, his garden and his home (wife, anyone? ;)).  And the oooh’s at the end are pretty amazing too, they’re unlike any Olly has ever done. I stole the lyrics sheet from the stage, will add it to the site at some point! Listen to the song above if you haven’t yet. But be warned: you’ll find yourself humming it at some point later this week!

There’s much more I should mention here: the great classics (72, Fishing For A Dream) and the lovely people I was with and met during the gig, before and after, the weather (crazy rain/sun/rain scenarios happening there!) and the fact that they were selling Door EP they found somewhere for bargain prices compared to what I bought them for on eBay several years ago. But I’ll end with saying it was another great gig by the guys which filled me up with enough energy to keep going till, well, till the next chance I get to see this band again!