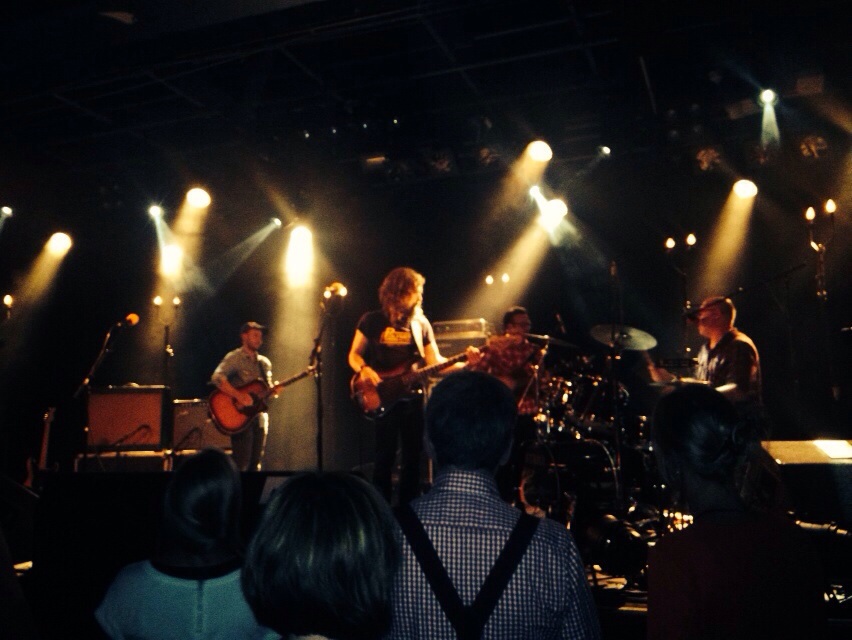 Sorry this took me a bit long… But here’s my memories from the weekend. 😉 And if you’re not interested in my words please check out the videos, audio and photos!

As any Turin Brakes fan outside the United Kingdom knows, it can be hard to see your favourite band live. Some European countries have been lucky – Germany has been relatively well-served with tour dates and Italy has done alright in recent years. For The Netherlands, it’s “only” been four years. But four years is still a very long time in my world of music. And I prefer to see my favourite band at least once a year. That’s why I often travel to the UK to see them instead. I’ve seen Turin Brakes more times in the UK than in The Netherlands.

So it feels special when they come to town. It’s a real treat. I will attempt to drag along friends and co-workers to prove I’m not crazy and show them this is a really great band. That’s what I did and it was an amazing weekend. We had some epic adventures. But mostly we saw three really good gigs.

Saturday’s gig took place in People’s Place in Amsterdam. The venue, which has almost no signing outside, is in the heart of Amsterdam and seems to be some private club owned by Tommy Hilfiger. We arrive there while the band were soundchecking. We, Maurice from Germany and myself, catch up with Laura, the Dutch TB fan turned booking agent, and get a drink while we listen to the band getting the sound right. After that Maurice and I go out for food, at the very nice Cafe George. Which I’d recommend ;).

We get back to the venue when the doors have just opened and the room is slowly getting fuller and fuller. I try to sell some merchandise while support band MOOD take the stage, but unfortunately there’s not a lot of people buying just yet. I do however talk to some fans and some of them are very dedicated in following the band on their adventures – having seen them all across the UK and Germany (but actually living in The Netherlands). It always makes me happy to see such dedicated fans. Probably because it makes me feel a little less crazy… Meanwhile, MOOD play an acoustic set that varies from Green Day-inspired tunes to stoner rock. They play an entertaining set while the room slowly fills up with people.

When the band takes the stage, the crowd is proper warmed up and I’m nervous as hell. I know it sounds stupid coming from a fan, but because I had friends along I get nervous….. What if they don’t have a good time? What if I don’t have a good time? It doesn’t have anything to do with the band or the venue or even the time and place. I just want a TB night to be as enjoyable for my friends as it is for me. Thankfully, tonight’s friends DO enjoy it. And so do I.

As I had guessed, the band kick of with the first four songs on We Were Here. They boast about driving to The Netherlands by car in a day, and not realizing they could actually do it. And that they should do it more often. The audience agrees on this, while the band rock through classics like Mind over Money, Painkiller, Fishing For A Dream and Guess You Heard (which is a classic in catchiness, although maybe not in age).

There’s many things I enjoy about a night like this, there was some dancing, some good banter on stage and some people really enjoying themselves. Including, I think, the guys on stage. After the obligatory first encore the band come back for a second time to Slack it all out for the evening. It was a great gig tonight – full of rock and power. Like a greatest hits and best of the new album.

After the show some people hang around for drinks, I sell some vinyls, EPs, albums and posters and hang out with the group we’ve assembled. We drink some more, discuss musical choices by the band – as the TB nerds we are. When the bar is getting ready to close I try to find anyone to watch the left-over merchandise. I stumble into the band backstage who are discussing ideas for Sunday afternoon’s acoustic gig in Nijmegen. I kindly suggest Part Of The World, one of my favourites of We Were Here and a song I’ve yet to hear live…

It’s around 2 AM when we get back to the hotel and after the adrenaline of a fun night is gone I finally fall asleep.

Sunday starts with a long walk in a surprisingly sunny Amsterdam. It’s a really gorgeous morning when we walk from our hotel to the cheap parking spot we found near the central station. We get breakfast on the way to the car. Then the 90 minute drive to Nijmegen starts. What starts out as a sunny road trip soon transforms into a foggy drive. Thankfully, we get to (also sunny) Nijmegen safely, although feeling some of last night’s action in both legs and mind.

The next leg of this adventure, however is a lot more relaxed than last night’s. In an old monastery a lot of locals gather for an intimate acoustic set. Once again, MOOD supports and even though the singer confides in me that his voice is f****ed up because of last night’s beer, they play a good set of songs and I’d even say they’re better in a stripped-down manner than the acoustic rock setup they played last night. Of course, I haven’t seen them rock out completely in ‘electric overdose’ as their album is called, so that might be even more exciting.

Turin Brakes wander on the stage to play a very, very lovely set without only two microphones as backup. I’ve seen the band play many sets but never like this. It’s intimate, direct and very funny as well. They open with Forever. Olly and Gale joke about Olly wearing red shoes, which is fitting because they are playing the Red Shoe Sessions. Eddie rocks out on the mandolin and joins in on what is usually Gale’s solo on Underdog. After that they play the gorgeous Mirror, delve into We Were Here and Time and Money, but also play Part of the World and Painkiller. They finish up with a lovely version of Rain City. I’ve recorded the whole set and made some videos which I’ll upload throughout the week. The first two are Forever and Mirror here:

The set is really, really good. It’s Turin Brakes playing together without any distance caused by wires or a barrier or a stage. Just four guys singing songs. It felt really special to be part of it. If only they played one more song… ONE MORE SONG. Anyway, listen to the set here:

My home is only a 5 minute drive from the Nijmegen venue, so we take a well-deserved break there, trying to catch our breath before we drive to Den Bosch for the final gig of this weekend. After eating a pizza we jump in the car and head to Den Bosch (45 minutes away) to the W2, a recently renovated old cigarettes factory turned music venue. It has an industrial vibe to it, but also some bright coloured rooms. There are even more familiar faces at this gig, so we miss the support act (This Land).

The venue isn’t completely sold out but it’s nicely filled up as the band kick into a similar setlist as the night before. But because of the industrial surroudings (and perhaps also as a response to the quiet afternoon show) the band kick it up a notch. They play an excellent version of Red Moon and songs like Dear Dad and Blindsided Again sound particular well in this venue. The audience are grooving along. Check out some great pics and videos here on the venue site. Even Underdog sounds more electric tonight:

They also play songs like Chim Chim Cher-ee (which works really well here too), Guess You Heard, Future Boy and the ever-lovely Fishing For A Dream. I’m on a high.

Overall, it’s nice epic final to the gig weekend. I was planning on leaving straight after the gig to catch some sleep (I appear to be having trouble with the touring life, not sure how these guys do it all the time!), but we end up chatting the night away with some drinks and jokes. The band even come out (which they didn’t do in Amsterdam) to sign some stuff and chat to some fans. Everybody seems happy even though it’s a Sunday night and a lot of people have to work in the morning. I took the next day off thankfully. I sell the remaining records on the merch table, apart from one Fishing For A Dream 7″ and the guys take photos with fans. One girl is kind enough to take a picture of the whole group that night.

See me smiling? There’s also a photo of me looking crazy standing behind the merch table. I will not share that here but I was definitely having fun. Also on that crazy picture there’s a guy who got his vinyls signed by the band. He might want that photo (since it’s of him and Gale) but I’d have to cut myself out of the picture first ;).

Anyway, as I said, we ended up having drinks afterwards contemplating the future of Turin Brakes, what they should do on the next album and coming up with NO good suggestions apart from “doing what you do” or something like that. (or: GO EDM). Perhaps, on a clear day I’ll write a blog about what I think Turin Brakes should do on their next album, just because it’s a fun exercise to think about it… But tonight I can just ride the musical wave back home, to my bed. It was good. It was very, very, very good. It was like a holiday, just as I had hoped.

And you might think I’ve had enough TB after three gigs in a weekend… And yes, I’m glad I can relax the next day but then again, I spend most of the day looking at pictures and videos from the weekend. And the next day… Well the next day I’m ready to go again… See you next time! 🙂