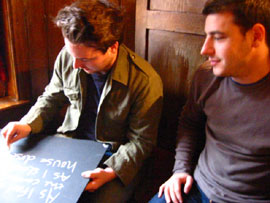 Now here’s a nice surprise. Someone has shared a nice bootleg dating back from when Turin Brakes supported travis in 2001 in Copenhagen. Although in my gig history the Travis support tour was in November 2001, this gig is dated 24 May 2001. It is a real support gig though, and a nice one too!

It is a nice audience recording, which does feature some chatty people. Highlights include Feeling Oblivion – curiously with drums (the band commented on Twitter: “errr oblivion with drums…. We were clearly experimenting!”) and Jet Trail, a regular in the live set around that time (not released until 2005 on the Red Moon EP). The full set:

Check out Feeling Oblivion and the download (a RAR file which you can open with free software) here.