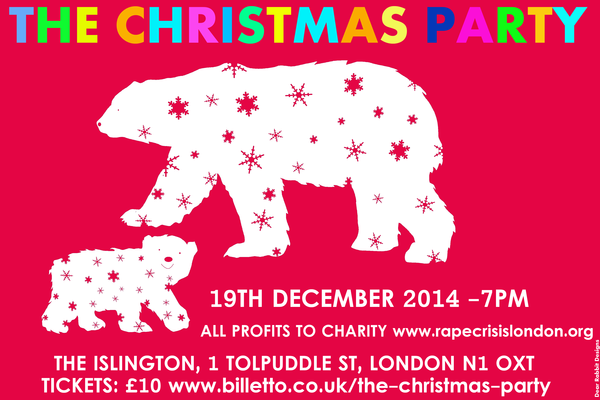 If you read the feature on Kevin Pearce from last week, you might already know this, but Turin Brakes are set to appear at The Christmas Party at The Islington next Friday, organized by none other than TB drummer/manager/awesome dude Rob Allum.

The legendary charity CHRISTMAS PARTY is back after a 5 year hiatus. With the usual ridiculous live music, a host of special guests and a setlist of classics… it’s one heck of a convivial night out for all our friends, old and new. This year the party is happening at The Islington, an atmospheric venue in a splendidly central location, with a late bar.

The party will feature lots of musical performances (including Kevin Pearce), so it’s gonna be a good night, and most importantly it’s for charity:

General public and all friends are positively encouraged to come along and all profits go to Rape Crisis London.

We really hope you can come to the party – but if you can’t make it, but want to support Rape Crisis London, please do so by making a donation.

Tickets are available from here and cost 10 GBP. No matter how long they’ll be playing this is the last TB performance of the year and the first London gig since May this year. Also: the band won’t be gigging again till well into the new year (there’s two dates in February), so if you have a chance and want to give some money to charity while you’re at it: please go! I wish I could make it!