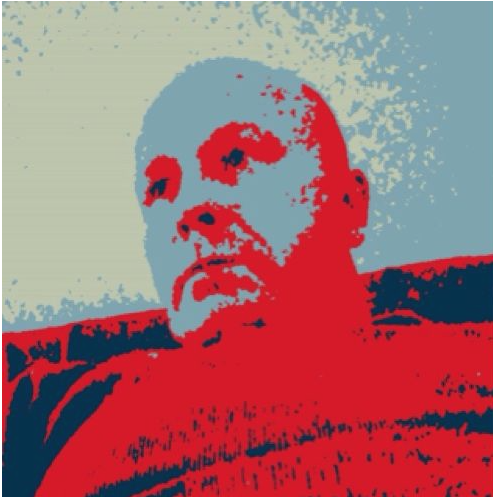 After last year’s remix competition for International, Fat Mavis felt that his remix could sound even better than it does. This year, he re-releases his remix as a free download. Ether Site asked him some questions about his remix, which sounds like a funked up version with some political connotations. Here are his answers, where he reveals his influences and how he re-released his remix this year.

Can you tell us about yourself? Who is Fat Mavis?

I’ve been making music, on and off since the late 80’s. Playing in various electronic bands. But I’ve only been remixing music, for the last 2 years, and taking it seriously in the last year. I came up with the name Fat Mavis, because I don’t like having any personal information about myself online.

What other work have you done?

My first remix was of a track called “Summertime” by a friend of mine’s band called D-N-K. Which was released on iTunes etc. I also have a remix which is being released (as an E.P) towards the end of March. Which I’m very excited about. Unfortunately I’ve been sworn to secrecy about the artist and the name of the track. Apologies.

How did you discover the remix contest for International? And why did you decide to participate?

I frequently use a website called macProVideo.com, which is a music software tutorial site. And Turin Brakes have done a series of tutorials on songwriting, using the track “International”. Which was highlighted by a remix competition of that track. I decided to participate because when remixing a track with real drums and guitars you can change the feel of the track.

Had you heard about Turin Brakes before?

I had heard of Turin Brakes, but embarrassingly I’d never heard any of their music. I spoke to a friend of mine, Steve (who has a couple of their albums), and he told me that they are great band.

What did you think of the original song when you first heard it?

How did you decide in what direction to take your remix? What was your inspiration / influences?

The direction I wanted to go in was Hip Hop meets “Loaded” by Primal Scream. I’d’ve always loved the track, and the vocal sample at the beginning. And I’ve always been fascinated by the assassination JFK. Even though I don’t have any interests in politics. Home or abroad.

Can you talk us through the creative process, how you ended up with the 2014 remix?

I think I started out with a 4 or 8 bar Hip Hop beat loop (my music software of choice was Reason 7). I didn’t want to stray too far from the original track. I just wanted to give the track a different feel. I even think I speeded up the track very slightly. One thing I always do with every remix is only listening to the original track a few times, because I don’t want to be too influenced by it. The JFK samples didn’t come until later. I knew I wanted to use a “speech” of some sort on the intro. I was going to use a speech of a well known American evangelist. It was by pure luck that I came across the JFK speech, which had “International” in it.

Why did you decide to remix your remix? What has changed?

After the track came 3rd in the competition Turin Brakes started following me on Twitter (#surprised). So I cheekily contacted them about releasing my track, and due to legal complications they agreed to allow it to be released as a free download. I was never very happy with the mixing and mastering of the track. I felt I rushed both processes, due to the deadline (the remixers curse). So just before Xmas I contacted a top producer/mix engineer called Mick Glossop (who has mixed many an album for Van Morrison), and he agreed to re-mixdown the track. Which was then mastered by Tim Young at Metropolis Mastering. I love the finished track. The 2015 re-issue version has only changed sonically. I was always happy with the arrangement.

I apologise to anyone if my remix has offended any Turin Brakes purists.

Thank you for your time Fat Mavis, how can people stay in touch with you?

2 comments on “Interview with Fat Mavis about ‘International’ remix”