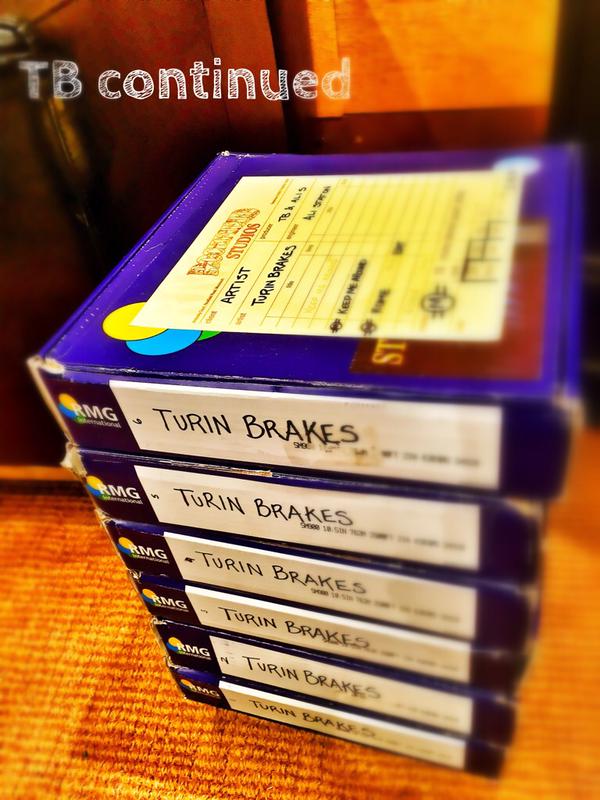 And suddenly it’s October. Remember October two years ago? We were all listening to We Were Here. This time last year I was sort of hoping we would have a new album by now and excited about the Dutch tour dates that were coming up in a matter of days. Alas, October 2015 is proving to be rather quiet, but there ARE things happening…


Earlier this week (the 30th of September), it was the tenth anniversary of my first Turin Brakes gig. I made a friend for life there, saw my favourite band dedicate a song to me after missing out on seeing them live at least three times in the Land of the Dutch. I’d been doing this website for about two years by then and the gig was right after Over and Over came out and right before the Red Moon EP was released (a friend brought it over from the UK dates, because it wasn’t yet available at the Amsterdam show).

Anyway, maybe it’s because of this anniversary and how much my life has changed since then and the fact there’s nothing new to obsess over yet, but yea, I’ve been missing the Turin Brakes life rather much this past week. The gigs, the music, the dancing of the past years, and I haven’t been to a TB gig this year. The first time that has happened since, well, since 2005. Admittedly, there’s two chances for me, I could go to Liverpool in December, or to the Talk Talk gig in London, but I’m not sure I know Talk Talk well enough to enjoy that gig, and the logistics of going to Liverpool are, well, rather complicated at the moment. Although it is on a Friday night, so there still is a possibility…

This week a colleague asked me how many times I’ve seen this band live, and this prompted me counting the many times I’ve seen them. At that moment, I guessed 15-20 times, but actually, next time I’ll see Turin Brakes it will be the 25th time! Right now, it looks like it will be 2016. It still feels a while away, but imagine the album being scheduled in January / February… Then we might get the first song preview before the year is out? Fingers crossed!

Thankfully, new developments have been, ehm, developing in the world of Turin Brakes, so hopefully it won’t be too long till I can get out of this melancholic groove and into excitement. The tweet below indicates the album has been mastered. This is the final step in the process, I think, the result of which is the record from which all copies of the record will be produced. In the previous album round-up I reported the album had been mixed. That was May, so it took another four months before the album got properly mastered. We don’t know what has happened to the album since then, but I like to think they stuck the tapes in a wooden barrel to let them age like fine whisky, then let aliens fly in from space and work their magic on them and then waited for the result to cool down and be playable on earth technology. Either that, or, you know, life happened. Although this tweet by Olly indicates something was done to the record.

Interestingly, pictured above are not only the usual suspects Olly, Gale, Rob (Eddy is not in the picture), co-producer Ali Staton but also a mystery person who I don’t know… Is it Max Tundra, who’s responsible for this awesome Long Distance remix? It would be interesting to see him involved in mastering the record but maybe Olly’s posting inside jokes again on Twitter…?:

Anyway, these are the songs that could/should/would make the album:

I just realised (hence the *) that the song I identified in this picture behind the blurry bit, might actually be called Home and therefore might actually be Be Home Soon. In that case we would instead have 6 song titles… But since this is TB7 I’m gonna leave the list like this and say we know of 7 songs.

So yea, now the record has been mastered there’s a record for which artwork has to be created. The tracklist has been decided and devising future plans can begin… It might be a few months before something bubbles up, but hopefully we’ll know more come that Liverpool gig. In fact, that might be shaping up to be a really special night ahead of the new album campaign instead of just a one-off show in a non-album year…

Whenever something pops up, I’ll post it here and if you happen to have any recordings or pictures or rumours you’d like to share, get in touch. For now I’ll dive back into the back catalogue. Maybe Dark On Fire… Or The Red Moon EP?