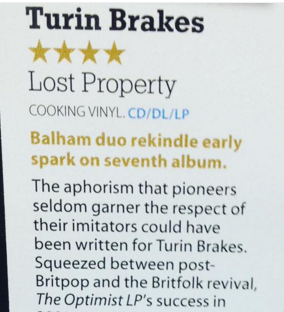 Some glowing reviews are coming in from the magazines for the new Turin Brakes album, Lost Property. Released on the 29th of January, it helps build anticipation, at least for me :).

Q Magazine gives 4 stars to the new album, just like SoundofViolence (in French) and Mojo. Though the band remarked on Twitter:

True fans are the real experts…

0 comments on “Glowing reviews for ‘Lost Property’ in press”