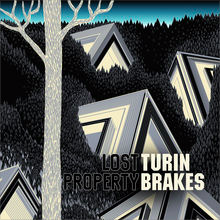 This week it’s release week in the world of Turin Brakes. This means we’re counting down to the release of the new Turin Brakes album Lost Property. Olly Knights has kindly agreed to answer some questions about the new record, which we’ll be publishing over the next few days. Also coming up: a review of Lost Property and hopefully many more goodies! Today Olly talks about recording and producing Lost Property.

With the band being a proper four-piece now, how has the songwriting process changed? Is it still you writing songs mostly, or exchanging ideas with Gale? Or do Rob and Eddie play a bigger part in the songwriting as well?

Olly: “It’s starts out as it always has, I find myself writing, I show it to G, we talk and make changes or expand or throw out but then (and this is the key difference now) we take the results to Rob and Edd and we all work on them together as a band in my studio. We keep what feels good as a band and we throw away what doesn’t… Simples.”

How has writing with other artists influenced this record, if at all?

Olly: “It’s been healthy to be less scared of just getting stuck in, music is just music, it doesn’t really have to involve much thinking thank god, it’s mostly instinct… The sessions we do always remind us of this point.”

How did you end up working with Tom Speight on the album? And what did he bring to the table after you have been working together as a unit for so long?

Olly: “We wrote about twenty songs together, mostly with the intention of being for Tom’s EPs and album. In the course of that we wrote a few which seemed to suit my voice more than his, when it came time for recording we realised we were just as close to these songs as the ones I’d written for the record and they went to places we enjoyed going to.”

Check back tomorrow for more answers from Olly, including the plans for the tour, the future and the ‘Lost Property’ artwork. Also check out part 1 and part 2.