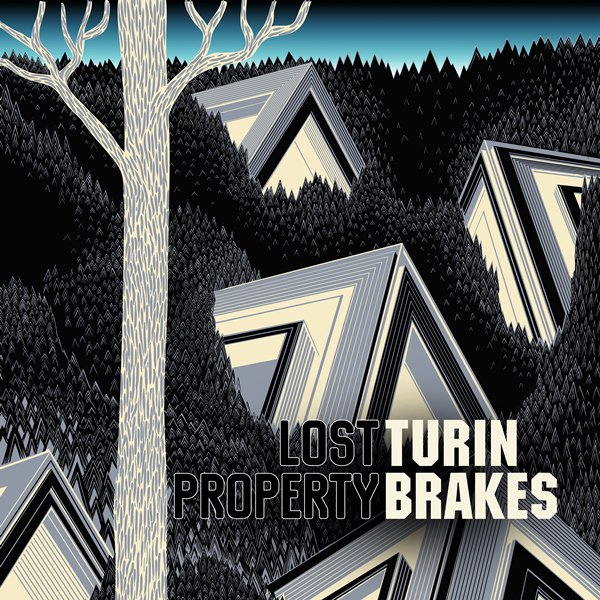 By now, we should know what makes a Turin Brakes album. In fact, I’m pretty sure We Were Here summed that up perfectly in 2013, while also signaling a new beginning for a new era. So if WWH was a new baseline, Lost Property is a new mindf*ck. In a way, it’s what Ether Song was to The Optimist LP, but that doesn’t do it justice and also makes you expect things of it that you shouldn’t expect. There are ingredients that are similar: like a band boosted in confidence by their last recording experience, a desire to create bigger and more ambitious songs and room for experimentation. But the outcome is wildly different. Whether the effect on fans is too, we’ll know very soon…

Lost Property starts of with familiar vibes. Opening songs 96 and Keep Me Around lure you into a false sense of security really. One would be forgiven to think this album is easy-going, lovely melodies with some skip in its step. But these songs are in fact the bridge one must cross to dive into the depths of Lost Property. While 96 and Keep Me Around are playing, one almost forgets the directness of these songs. Olly’s lyrics are invigorating on these songs and the arrangements make them sound even more direct than they are (more on that later). The lush strings on Keep Me Around makes the whole band swirl and dance and Gale’s riffing on 96 makes the song sound more matter-of-fact in the verses and more rocking in the chorus. That is the kind of riffs we’re used to as Turin Brakes fans, but that doesn’t make it less of a welcome sound to hear in 2016.

It’s after these two opening songs that the album really reveals itself. The Quiet Ones starts of, fittingly, quietly, with what surely must be a proper callback to State Of Things: Keep your ears close to the ground. Even the quiet guitar intro is similar and the way into the chorus. But then, things get real. Suddenly we get a multitude of Ollys and then the song really takes off after the first chorus, and keeps building layer upon layer. I could hear at least three guitar parts, but there is way more going on then just that. And then the songs breaks up with a piano part in the distance. It’s familiar yet strange at the same time. This is a feeling that I had more often while listening to this record.

The title track airs a familiar sentiment of loss and things left behind (also: people). A mellow track that echoes melancholy and sadness. In the second verse there starts some gorgeous guitar, after the chorus some lovely strings kick in. Production-wise, this band has gone all in on this record. It builds and builds and builds, while never forgetting the actual feeling of the core of the song. It works and it works very well. And it has the ultimate Olly lyric: When we turn the telescope from the sky to within.

Even songs that start of relatively straight-forward go off on musical tangents and journeys that must be exciting for the musicians too, not just the listeners. Hope We Make It switches drum rhythm before coming to an epic climax, Rome has a real 70s vibe to it, one can imagine Christopher Walken screaming “needs more cowbell” in the background, but it works great on the record. There’s a Star Wars reference here, probably, although the song itself says Nobody Knows A Thing… So what do I know? Earthquakes and Old Souls, this is Olly doing what he does best.

Lyrically, Olly remains the king of describing ordinary feelings and situations in a way that’s both deceivingly simple, relatable and cryptic at the same time. A casual listeners might take these metaphors at face value, but repeated listening reveals layers of meaning without turning these lyrics into puzzles or mazes of weirdness. Don’t expect the unexpected, but expect to be surprised. When Olly sings about a burned-out car needing a Jump Start, you can say that doesn’t entirely make sense taken literally, but yeah, if we took all songs literally we’d be in a world of pain. We’ve all felt burnt-out at one point, and we’ve all felt like we could use a jump start. That’s the level where the lyrics really start to make sense, and I for one can only smile when the (for me) hidden layers start to shine through.

On Brighter Than The Dark, for example, a track that holds some of the most epic and most introspective moments of the record. It starts as a jam, then completely breaks down into almost silence with only handclaps, vocals and guitar. Until it builds into an intense finale jam where all hell breaks loose. The music echoes the feeling that the lyrics evoke: it sparks into life.

This is probably the biggest record Turin Brakes have ever made, bigger than Ether Song and bigger than Dark On Fire. Save You is an absolutely huge piano ballad. Yes, there’s guitar playing along to the piano, but there’s no guitar chords here until the second verse. It starts off as a kind of cross between a slow Editors song and an Adele ballad, but somehow by the bridge it has also become a unique TB song, something they never done before. It might take some getting used to, because even though Turin Brakes have recorded some of the most emotional songs I know, they’ve never gone all in on the drama like this. Strings: Check. Haunting backing vocals: Check. Epic Sentiment: Check.

And then comes Martini, a small finger-picking song that in many ways feels out of place on first listen. And then I realized it was just another extreme of our band, in this case it’s not unlike Olly’s solo work on If Not Now When. That is what this album ultimately amounts to: Extreme Turin Brakes. Turin Brakes are doing what they do without apologizing, without compromise and doing it in the best way they can.

The final three songs illustrate this best. Martini is quietly perfect, while Jump Start is both retro rock and space pop at the same time. On the record it sounds like it’s from another era, live it will sound even bigger and better, I’m sure of this. In the 5 minutes of Hope We Make It, the guys take once again the time to break things down and then build it up again. Without the instrumental break, the song would be nice enough, but the guitar work, drums, bass line make it, well, not very suitable for the 3-minute-radio-fold but all the greater to groove along to. Black Rabbit is over 6 minute of introvert music, with once again a final climax with electric guitars, strings and everything you want in the final of Lost Property. It’s emotional.

“Extreme Turin Brakes” might not make this record the most accessible to date. It’s complicated in places. The theme of loss is extremely well-chosen, all these songs are either about things lost, losing them or the fear that comes with losing things you hold dear. And things do get rather intense on the way. It’s not a wall of sound, these are still perfectly great songs, but presented in a way that is most rewarding when listened to in album format and listened to repeatedly.

Lost Property shows that Turin Brakes have lost none of their drive, ambition and skill to do their own unique brand of music. Turin Brakes provide hope for the future underneath sometimes somber tones, emotional themes and many layers of music. They’ve done that before, but never as well-executed as here. It may not always be in 3-minute-pop-slices, but Turin Brakes haven’t been that kind of band, maybe ever. It may not be as accessible as on We Were Here, but that would have been boring for me. What they have done here, is a make a proper album album. It’s gorgeous, it’s huge and ultimately it’s very rewarding. It’s very Turin Brakes and what’s even better: it’s even more Turin Brakes than I thought possible.

I guess the first verse of Keep Me Around sums it up perfectly: I guess I can finally let go of all the uncertainty. Turin Brakes aren’t shy about being Turin Brakes. It’s sad, happy, dark, loud, quiet and indulging at the same the time. And when you hear the little things like the band rummaging in the background, it’s still very much a labour of love of the band and Ali Staton. I hope you find it similarly rewarding and exciting and perplexing as I did this past week. And that when you’re asked to describe it by someone, all you really can say is “It’s Extreme Turin Brakes”. Because that’s what this review is, really. I just took the long way round of saying this. But I learnt from Lost Property that sometimes that’s the best way around. You can even dance a little on the way…