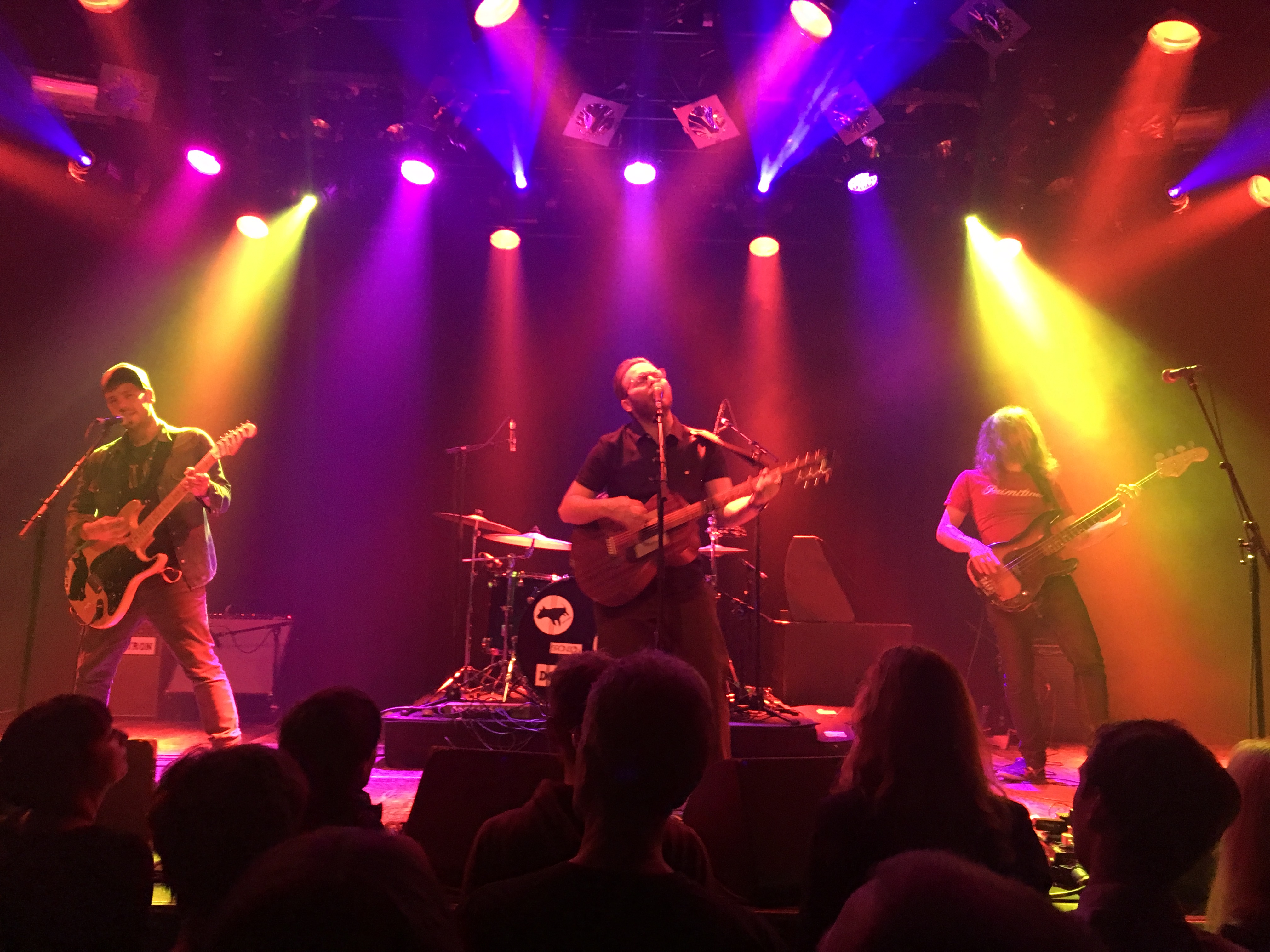 Having just returned home after a weekend with two great Turin Brakes gigs, I can’t do much else then to immediately start writing about it. Not because I need to write it down, but because doing anything else that isn’t TB-related isn’t very interesting right now. I tried to watch an episode of a series on Netflix, walked around the city for a bit (the sun is shining here, with temperatures of almost 20 degrees!), but yea, I’m just slightly buzzing from two great days and nights. And since I still haven’t written about the Amsterdam show in April, I figured I might as well start writing the reports of the past two nights. While the memories are still fresh.

It’s been a few years since Turin Brakes played the Melkweg. They last visited Amsterdam in April, but it’s been 9 years since the last show in the “Milkyway”. Not 11 years, as a certain individual shouted during the show, so sorry about that. I’m getting older too ;). Anyway, it’s good to see this venue having a crowd as friendly as always. They seem well up for a good show, and TB are certainly giving their best.

I started the day at work, clocking in half a day before returning home, grabbing my stuff and driving to our Amsterdam Airbnb with my German friend Maurice. We play music, laugh about the traffic jam the other way and manage to get to Amsterdam just before evening traffic kicks in. Around 4.30 pm we enter our great apartment, and dump our stuff before parking the car at the Olympic Stadium. By then we’re joined by Maggie, a dedicated Dutch fan who we met at the previous Amsterdam show in April. She immediately signed up for the Ether Site Road Trip experience, which basically consists of TB fans geeking out and travelling across the country for the shows. She would later become the hero of the weekend, but more on that later!

When we get back to the apartment, we are joined by my friend Marc for pizza. Marc is a former colleague of mine, and one who has embraced Turin Brakes well and proper by now. This is his third Turin Brakes show and it’s a special occasion. He’s collecting money for cancer research and treatment in memory of his father. He’s cycling up the Alpe d’Huez in France next Summer, and has to collect at least 2500 euros to do so. Thanks to Turin Brakes, he’s now well on his way. They kindly agreed to do a little meet & greet at the end of the evening and donated some money for the cause as well. If you want to help his cause, check out this page (in Dutch).

Anyway, after pizza we hurry to the venue, in time to catch the last song of Dog Byron‘s support set. They’re playing well, but sadly we didn’t make it in time to hear more of them. Thankfully I saw them in April already, supporting Turin Brakes. We find a good spot in the middle of the venue, near the front, so we have a good view. By the time TB take the stage at 9, we’re ready to dance and sing. And we can…!

The opening of this set is pretty strong, with new songs 96, Keep Me Around and Lost Property but my favourite part of the gig was probably the trio Future Boy, Jump Start and Last Chance. These songs display the range of TB in 2016: some classic acoustic music and some epic rocking songs. Future Boy is still acoustic, but very much beefed up. Last Chance has an epic climax (as it does on Dark on Fire) and Jump Start just really works well live. And of course, classics like Long Distance, 72, Underdog and Slack still work really great.

Gale had some technical problems (as seems to happen more often in Amsterdam). When playing electric, there’s a slight buzzing sound, but thankfully not when he’s playing his acoustic. Besides that minor niggle, the band play great and I’m really enjoying myself, as are the fellow fans around me. By now we’ve been joined by more familiar faces and that’s a really great plus of going to a TB gig for me. It’s so much fun to rock out to your favourite music and do it with people who enjoy it as much as yourself.

Afterwards we go backstage for the meet & greet in a ‘tiny dusty / smokey room’. We take some pictures, make some small talk and talk about the show and the band. They’re really nice people, those 4 guys you see on stage… Joining the meet & greet for charity are Helena & Steve and Paul and Claron who flew in from the UK for the show. Dedication! Dog Byron is present as well, they are nice Italian guys who know their way around Grappa. 😉

Afterwards, we go outside to the Leidseplein area for another drink. It’s raining by now, but we don’t let that bother us. After drinks, good talks and laughs it’s time to get back to the Airbnb. Because of the rain, we take a cab. It’s around 3.15 am when I stumble into a very comfortable bed and look for sleep to take me away to dreams of black rabbits and spaceships.

The Saturday starts as Friday night ended: with rain. Our Airbnb is in De Pijp, which is a nice old part of Amsterdam with a great market and nice shops. We have to leave the Airbnb by 11 am so we get our things, store them with the owner and walk around the city for two hours, then get the car and collect our things to head to Eindhoven. In the car we play songs on the radio and slowly see the sky clearing. By the time we get to Eindhoven, it’s positively sunny outside! In October!

We’ve got only a few things we really want today: some food, some relax time and get to the venue in time to see Dog Byron. Not all of this we’ll manage unfortunately. But two out of three isn’t bad. We check into the hotel we found near Eindhoven station. It’s pretty sweet: nice big rooms with art and weird beds and couches. We’ve got two rooms with the three of us, so plenty of space.

At 4 pm we go outside to wander the city, find coffee and have some snacks. We find a nice restaurant that does great food, but we decide to hold of proper dinner until later, only having some starters for now. While we’re enjoying the last minutes of sunshine, we hear about a distressing development: some of drummer Rob Allum’s gear got left behind in Amsterdam at the Melkweg. While it’s not impossible to play the gig without it, he’d prefer to get it back and use the cowbell on Painkiller and special sticks for special songs!

This is when we kick into action mode. Social media, phone calls to friends in Amsterdam, to see whether anyone is able to collect the stuff at the venue, and bring it to Eindhoven for free gig tickets. Sadly, that isn’t the case as such short notice, but we do find fellow fan Helena being extremely helpful by collecting Rob’s gear at the venue and bringing to a place where someone can collect it.

That someone is Maggie, who jumped in the car around 6.30 and drove all the way to Amsterdam and back to make a good gig great. Maurice and I stay behind in our hotel room, which has turned into our war room / connection hub, staying in touch with people in Eindhoven, Amsterdam and Maggie / in-between to make sure everyone’s alright and things are working out. We do manage to get some food in our bellies, but sadly it’s long after Dog Byron’s set when we get to the venue. 10 minutes before Turin Brakes come on at 9.30 pm, Maurice and I find ourselves standing at nicely filled room full of people.

Maggie is still on her way back as the gig kicks off, showing proper dedication and missing the first couple of songs. It would have been great if she had entered during Lost Property (after all, she’s returning TB’s Lost Property). But instead she enters during Mind Over Money (missing 96, Keep Me Around and Lost Property), having not had any proper food since a bowl of soup around 5PM. After We Were Here she delivers the percussion and drum sticks to the stage being applauded and hailed as the great fan she clearly is. Later in the show, the band dedicate 72 to her.

The show is really, really good. Arguably, the sound is even better than in Amsterdam, and the rocking songs sound really epic. The setlist is the same as in Amsterdam, apart from final song Slack which is replaced by the glorious rock song Red Moon. It suits the night, which has a full moon shining above us we notice later when wandering through the streets of Nijmegen at 3.30 am. For now, we’re having a really good time. Songs like No Mercy, Black Rabbit and Save You, – which Olly said they wanted to take off the setlist before it got a sync on Designated Survivor work really well, and by the end, the crowd is really enthusiastic as well.

And then, suddenly, it’s over. The show’s done and the crowd slowly dissolves into the night. We decide to go for drinks with Max from Dog Byron, who’s also a really friendly merchandise salesmen. We talk about the finer things in life: music, love and all those topics that you can only discuss away from the light of the sun. I’m tired, but I also don’t want this night to end. It’s been so much fun. But when it’s over, it’s over and around 4 am we go to the hotel and sleep until the morning comes – and almost goes.

Checkout is at noon, so one minute before 12 we hand over our room keys and are on our way. The road trip takes me back to Nijmegen, Maurice back to Germany and Maggie back to the west of our small country full of people. These were two great shows by a band who show no sign of losing what makes them great, a band who know very well what works and what the audience want to hear.

Counting these shows, I’ve now seen Turin Brakes 29 times and I’ve got memories for each of them. Whether it’s bizarre things like fire alarms going off in the middle of a show, to a crazy encore in Brighton, to my friend supporting TB in England, to these crazy road trip adventures with a lot of beer, not a lot of sleep but most of all crazy good times, I count myself lucky for each time I get to see Turin Brakes live and I can’t wait to close out 2016 with their show at Islington Assembly Hall in December. Turin Brakes are an incredible live act, with their no-hidden-tricks, no playback and no flashy effects that distract from the great songs. It’s 4 guys making great music, and doing that really well. And it works again and again.

While I’m typing this Turin Brakes are off to Paris. And to be honest: I was very much tempted to go along for the show. But yea, life continues, and there’s a day job waiting at the end of this weekend. All Good Things In Time! But knowing Turin Brakes, there’ll be another time we’ll do this again. With great fans, friends and bands. With adventures, plot twists but most of all good times.

0 comments on “[Etherish] Another one of those road trips”