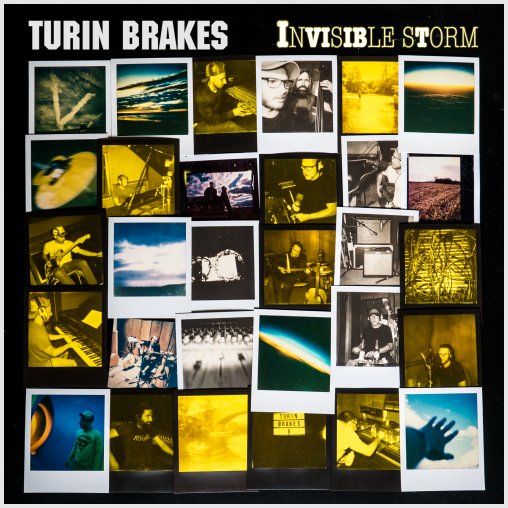 Some things stay the same. Turin Brakes will always react to the previous record. And so, after Lost Property comes Invisible Storm: a lighter record, a shorter record and probably a bolder one. Getting into Lost Property proved to be difficult for me at first, because of the dark, moody vibe surrounding many of the album tracks. With Invisible Storm it proves difficult because of the pop current running underneath. Now, don’t get me wrong I like (indie) pop. But even for me, an opening salvo of Wait, Always and the excellent Lost in The Woods, closely followed by Life Forms was a bit overwhelming at first. In the end though, Turin Brakes don’t actually make music to please me. They just make music, which I happen to love – and live with everyday. And so, after living with it for a while TB8 grew on me immensely. So here are my thoughts….

Song by Song, Then? Okay… Would You Be Mine is a great, great song that has set-opener written all over it for the upcoming tour. Its driving rhythm, its angst-filled lyrics and the great guitar work and even greater bass riff, may have surprised some – including myself, but it works so well. Besides, in the context of Invisible Storm it sets a scene. While not as poppy as the other songs, thematically it kicks off a recurring theme of blending our inner feelings with outer turmoil going on. Whether President Donald Trump is one those Great White Apes with the nuclear codes, one can only guess. But I have a feeling he is….

Single Wait started off as a much moodier song, as can be heard in the acoustic version available as a download, but here it has handclaps, mandolins and synths, borrowing from influences like OutKast and others. It has a truly rich production, proving for a slick song that only gets better with more airplay. It has quintessential Olly lyrics (hello Jet Trail), which makes it a clear Turin Brakes song in an irresistible format.

Then it’s Always, a song that I have a slight uneasy relationship with. It’s almost a sequel to Wait, indie pop with a bigger focus on the outside world. Other reviewers note similarity to Simon & Garfunkel, but I just get slightly distracted by the effects going on in the background. While the song makes perfect sense in the context of the album, it’s the one song on this record I have yet to click with. Which probably means I just need to spend more time with it….

Now Lost In The Woods… Wow. I know I have a bad track record when it comes to predicting Turin Brakes singles. If I had been right, Guess You Heard would have propelled TB to insane riches and fame and stuff. But I mean, Lost In The Woods is a perfect bit of indie pop for me, so I’m gonna say it should be the next single. It takes some lovely Fleetwood Mac, puts it in a blender with Turin Brakes except oh wait did I just add double TB in there? Apparently, Olly’s daughter Daisy is playing flute on this. And it all sounds so lovely smooth. What I’m trying to say is this is one of the highlights of the album for me. And did I say it should be a single?

The album takes a much needed breather on Deep Sea Diver, providing a lovely late night, lo-fi acoustic instrumentation with Olly’s introspective lyrics (“Tied to my mast alone, it’s a deep sea dive back home”). Still lasting less than four minutes, it’s the first time the album slows down, and it does it well. The harmonies here are top-notch, and Gale’s slight guitar is great as ever.

On to Life Forms, in which the grand scheme of things gets an electric guitar solo. I’m kind of hoping for a live version in which Rob’s percussion gets some extra impact and Olly doing a karate kick in the pause of the chorus… We are – CHOP – Life Forms. No? Well, one can dream no? Like, Would You Be Mine this song deals with the society we currently find ourselves in, but tries to find comfort in the fact that we are just Life Forms somewhere in space…

The title track is up next, Invisible Storm builds on piano and sparse chords up to an epic chorus. The song – like the whole album – deals with inner stress and feelings coming to the surface. In that way, the song references a whole bunch of other songs, including Panic Attack, Guess You Heard, The Door, Mind Over Money and many more. Fighting an invisible storm is something many of us do everyday, according to the band. The song ends as suddenly as it builds, and so one can only hope this gets an extended outro on tour. It’s a good feeling when you sing along to the chorus and, with the band, you end up hearing just silence at the end… I just wish the song would go on for a few more minutes….

Everything All At Once breaks format with the rest of the album in that it becomes a punchy, guitar-heavy song with almost aggressive lyrics, calling back to the Slack-type songs of the band’s catalogue. Except this is a love song, I think, or at least one with a man on a mission. Crashing my car to get near you, setting my aim for the stars. Killing time at the front of the line, I just wanna be where you are…

Now Tomorrow feels closer to the Lost Property vibe than any other song. Maybe it’s because this song was co-written by Tom Speight, like some songs on the previous record, or because the guitar riffs feel similarly structured to Jump Start, but it’s a nice familiar sound after the slightly unfamiliar Everything All At Once. To my taste, the song would benefit from being a bit slower, the song is over before it has properly begun. Then again, maybe the point is to be short and sweet, and then have that chorus stuck in your head. In that case: it is a great success.

Smoke and Mirrors has some lovely strings and additional instruments. Lyrically it’s quite minimalistic, calling up imagery like only the best TB songs do, but musically there’s so much going on. It’s the one place where the band take the time to really get going. It’s rewarding, it’s lovely and it’s great because of all that.

And then that final song. Don’t Know Much fits in a great tradition of Turin Brakes songs, with slide guitar reminiscent of Future Boy and The Optimist. But with a Stranger Things reference in the first line, this is very much a song for the now. “Find a way to get through”, is what the band appear to be singing here. The whole band join in on the final lines, which has a nice emotional resonance. Lyrically, the song appears to be much gentler about our predicament than most of it what’s gone before (Pray the god or tuck you tie if you like, we don’t know much about this life). It’s a nice, fitting closer that has you thinking in silence for a while after the record ends.

While yes, a part of me, longs for giving some of these tracks room to breath and extended instrumental breaks I’ve grown used to, Invisible Storm is clearly not the place for that. Instead, it still has rich instrumentation and bold production provided by our regular 4 plus co-producer Ali Staton, Dave Palmer (of Ether Song fame), Olly’s daughter Daisy and a string section. Invisible Storm provides a lot of additional little moments that I only picked up after a while. Don’t be fooled by it’s slick first half or it’s more in-depth second half: on both of those halves Turin Brakes do what they do best. They write direct, intimate guitar songs with cinematic lyrics, emotions and instrumentation. And believe me when I say that live these songs will work as great, if not better.

In the end, listening to Turin Brakes on Invisible Storm makes me feel warm and fuzzy and taking these songs on the road with me to work, or on road trips in the weekend should only make life better. They’re a voice of sanity in a world that doesn’t make sense, with songs that get stuck in your head as soon as you hear them. Let’s hope the album goes down a storm.

Invisible Storm is out now. Obviously.

4 comments on “[Etherish] My thoughts on Invisible Storm”