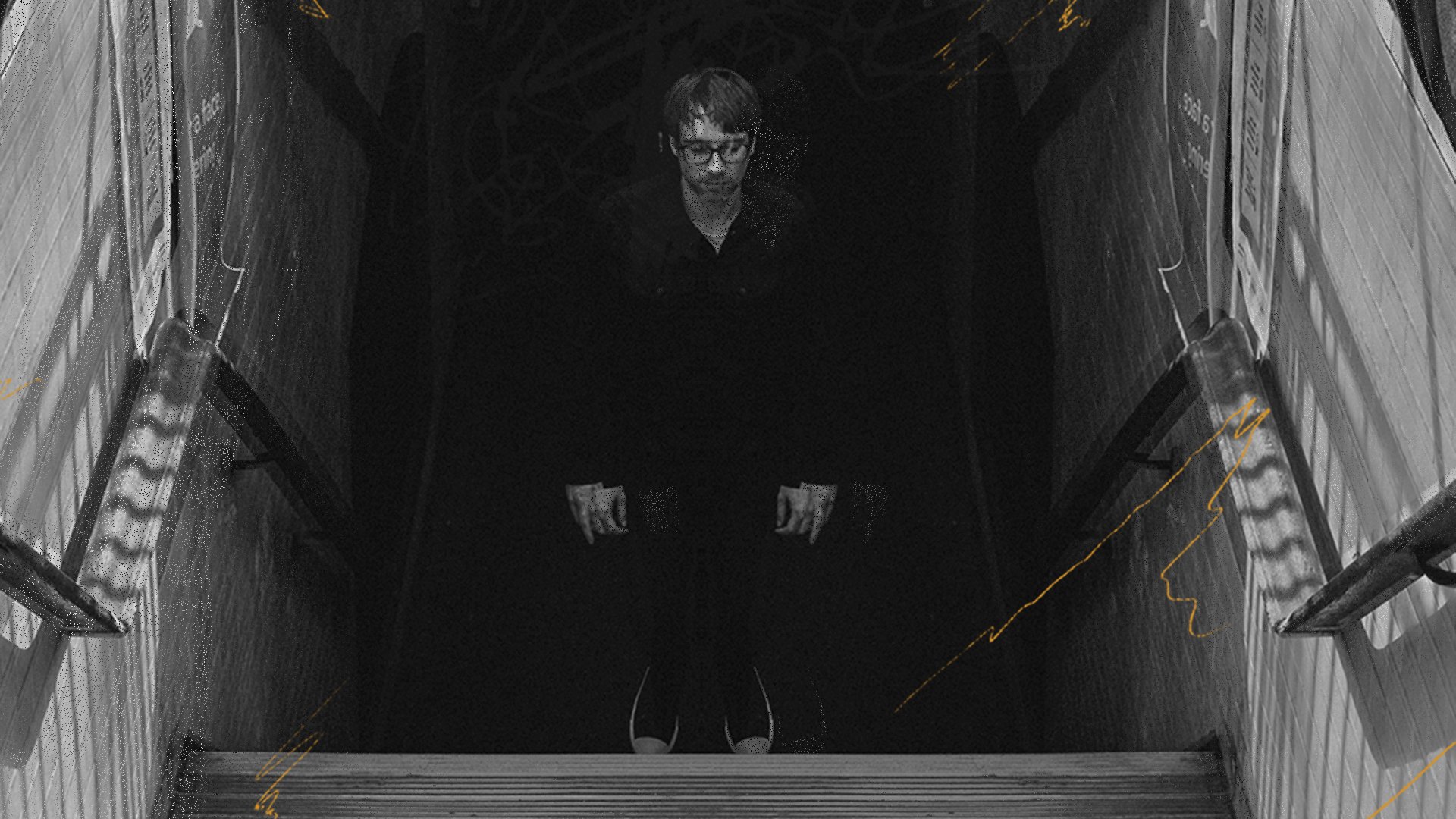 As the tour for Wide-Eyed Nowhere kicks off, we interview the first support act on the Turin Brakes tour. Fast Trains (a project by Tom Wells) is supporting TB on the September dates. Make sure you head down early to catch his set. Tom was kind enough to answer some questions! Read his answers below…

Can you talk a little bit about Fast Trains for those who don’t know it?

Hi! Sure, so Fast Trains is my solo project, combining alternative pop music with a cryptic visual space called ourWorld.

Fast Trains has quite unusual origins, in that it was originally intended to be a 4-part animation series. We (myself and illustrator/animator Sam Brandon) made our first video called ‘Measure by Measure’, which was released to YouTube in early 2019. However, we realised that we couldn’t continue down that path as it took about a year to make that one video!

Shortly after that, the music got picked up by BBC 6 Music here in the UK, and I started getting asked about this new ‘band’ that wasn’t meant to be a band at all! So I set about producing some more music, playing all the instruments myself and recording it in my little flat… purely for the enjoyment of creating something that would excite me, imagining this ourWorld idea we had started in the ‘Measure by Measure’ video and how that would sound.

The live element of Fast Trains only really came about over the past year or so, because as you can imagine, I didn’t really have a clue how I was going to perform it all. Now I have two live shows; a solo show where I perform the songs stripped back to their songwriting core, and a full band show which is more like the records but introduces a fair amount of improvisation around the songs. The solo show is what I’ll be bringing to the Turin Brakes tour.

Your music doesn’t appear on streaming services, only your website, YouTube, Bandcamp and physical media? Why did you make this choice? And what do you hope to achieve with this?

Well as mentioned, Fast Trains was intended to be an animation series originally, so YouTube was the instinctive choice. I soon realised we needed a home for ourWorld, and so a website was created and that is very much the heart of what Fast Trains is now, with its mailing list community acting as a secret little club. Someone recently described Fast Trains as a ‘mysterious online cult’… that’s one way of putting it. I’d like to think of it more as a community of music lovers. But maybe don’t drink the Kool-Aid, just in case.

The music has been kept off streaming platforms for now as I wanted to see how far we could take things without it. It’s been really fun swimming against the tide so to speak and encouraging people to visit the website and become part of this new community.

I’m not ruling out a move to Spotify and the like in the future, but I seriously question the ethics of some of these streaming platforms and their long-term effect on creators. Bandcamp is more artist-friendly, with its own community of music fans who really appreciate the value of music, so that’s just more fitting with my mentality and beliefs as a songwriter and artist.

Your music is guitar driven, melodic and rich in production. What kind of music do you want to make and are you where you want to go with it yet?

That’s a nice description, thank you! The beauty of having a solo project under a more traditional ‘band name’ is that I can do whatever I want musically. I think that as long as it’s my songs and my voice fronting it, there’s so much scope for movement on the production and the sound of the records, and I’ll definitely be exploring where we can take it on each record I make.

The key thing for me is the songwriting that underpins it. I have a rule now that every song must be able to be stripped back to an acoustic guitar or piano. Firstly, this helps with my live performances, particularly my solo show where it’s just me and the song and nowhere to hide. But mainly I just think that a song should work in its bare bones state, and if it stands up like that without any production then it’s like building on the best possible foundations.

Can you talk a little bit about the ourWorld concept? This is both a cryptic visual space and a series of EPs you are releasing?

Correct. So it started with the ‘Measure by Measure’ video. We had a very clear idea of the world we wanted to create, with its brutalist landscapes, minimalist colour palette and the characters that inhabit it. There’s also a coded language that runs through Fast Trains, which is all over the videos, artwork, social media etc. It’s a real code, that can be decrypted. Currently I think there’s about 4 people in the (real) world that know how to write and decode it.

I think hearing a record I’d written, produced, engineered and performed in its entirety get played on national radio for the first time was a big moment. A bit of a seal of approval if you like. Pressing the first vinyl and seeing it sell out before release was also a great feeling, as often it’s hard to measure whether people are really listening and connecting with the music. But if I’m really honest, I think stepping on stage on my own for the first time and delivering a performance I was proud of was massive for me; I’d been cripped by self-doubt for years on whether I could do that, and I still remind myself just how far I’ve come in such a short stretch of time.

It’s interesting how that’s evolved as it was never an original part of what I wanted to do with Fast Trains. But from the very first live show I noticed that the songs connect to people in a far more elevated way when performed in the same room.

With Fast Trains I feel like the fans are a really nice, supportive community… primarily made up of music nerds like me! And so bringing everyone together in a physical space to share in a moment is always a special thing.

How well do you know Turin Brakes? Any stories?

Well, I’m at risk of coming across as a bit of a TB stalker if I’m honest. Those who know me will know I’m such a huge fan – they’re the band I’ve seen live more than any other, and their albums have soundtracked my entire music-making life. So yeah… I best stop otherwise they may read this and get freaked out. Gale, I promise I’ve not been going through your bins…

Are you looking forward to playing with Turin Brakes? Do you have any (personal) connection with the band?

I’m writing this a couple of days before the first show, so am currently jumping between huge excitement and a steady dose of nerves. I really want these performances to be the best I’ve done yet.

I’ve met the band as a fan a few times over the years, firstly at an instore performance at Pie & Vinyl in Southsea. I still have my signed copy of ‘We Were Here’ sitting proudly in the record collection. Then I met Olly properly backstage at Victorious Festival a few years later – I’d been performing in another band at the time and was too nervous to go over and say hi! Fortunately my other half did the introducing that day… I can’t remember what we chatted about, I think we were both excited to watch Elbow play later.

What are your plans for the supporting slot on the Turin Brakes dates from Shrewsbury to Oxford?

Yes, so I’m on the first 8 shows of the tour, spanning the September dates. I’ll be performing my solo show which I first toured across the UK in April; it’s an intimate performance of the songs from Fast Trains, stripping the songs back to the bare bones. I love the solo shows as it gives me a chance to interact with the crowd more and mix the setlists up based on how the room is feeling. It’s never the same show each night and those moments shared with the audience can be really special.

Any songs and/or videos Turin Brakes fans definitely need to check out before the show, or any songs that would be a great starting point to get to know Fast Trains better?

I’d start with ‘Measure by Measure’ and ‘A Thousand Tiny Cuts’, they’re probably my most well-known (with the latter reaching the final of 2021’s UK Songwriting Contest). If you head to the Fast Trains website, you can stream all the music released so far for free and properly dig into what we’re doing with ourWorld too.

What song do you most look forward to playing on tour?

Well I’ve just finished writing what will be the Fast Trains debut album, so I’ve been performing lots of songs from that recently… it’s always exciting to play new things of course but in this case I’m very confident in the new material. There’s a song called ‘This Roundabout’ that is a favourite of mine – sometimes you just get a hunch about a song that it’s going to resonate with people, and this one is a bit of a cathartic release for me too.

For people who want to stay in touch and see what you’re up to? Where can they best follow you?

The mailing list on the Fast Trains website is the best place. You get news of course, but also invites to secret gigs and lots of exclusive stuff, discounts of merch etc. I’m on the socials too @thisisfasttrains across the board, except Twitter where I go under my real name (Tom Wells) @tomwellsmusic.

Anything else we need to know about you?

Hmmm… I’m always a bit hesitant about sharing much about myself… why do you think I hide behind the Fast Trains moniker haha! I’m a big snooker fan, both playing and watching, so that’ll probably come up in any conversations with me. I love hearing new music too so any suggestions are always welcome!

Thanks Tom for taking the time to answer our questions and we hope you have an excellent time on tour with the band. Find Tom on the social @thisisfasttrains and check out the website to listen to more music and find out about ourWorld!