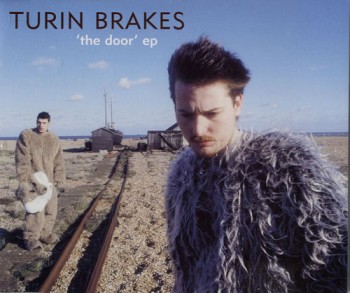 The first release ever by Turin Brakes. Only 500 made of the 7 INCH and the CD version. Very hard to find these days. It features a very old version of The Door, without the solo. The other songs would also be recorded again later during The Optimist Era.

The first and last of the four tracks featured on this recording are typical of Turin Brakes’ deep and accurate portrayal of the human condition. ‘The Door’ is a personal account of the pain of decision making, whilst ‘The Road’ gives an optimistic outlook on what the future may bring. By TV Light is a drunken affair and can be described as song about someone longing to be heard or understood, aswell as moving in another direction. “I swear if you listen, you might just hear our song”, “and the pavements lead to another place”. ‘Nowhere’ is a sweet instrumental, the title perhaps lending itself to Olly’s feelings at the time of being lost. The track features some beautiful slide guitar from Gale, and is Turin Brakes’ experiment if you like. It was there way of getting out what they’d learnt musically in such a short space of time.

0 comments on “The Road”